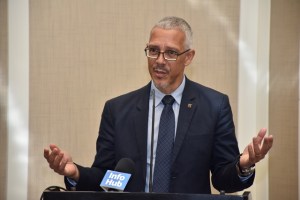 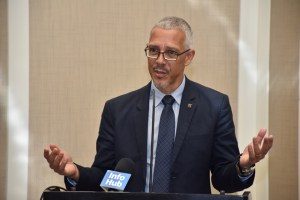 Amid criticisms that Guyana struck a bad deal with ExxonMobil, and based on popular public opinion that the country will not receive a fair share of the oil resources, Business Minister Dominic Gaskin has defended the Government stating that the monies the country will receive from this industry is nowhere close to “chicken feed.”

In fact the minister claimed that Guyana stands to benefit tremendously from the oil sector, although certain mechanisms are yet to be put in place. He opined that given the advanced preparations being made by the administration, there is no doubt that the country will get the best out of this new budding sector.

Gaskin was quick to debunk criticisms that the two percent royalty that Guyana will receive from ExxonMobil was too low, but within the same breath he acknowledged that the contract is not the best. Nevertheless, he believes that Guyana is now in a better position to auction the remaining oil blocks and get the best possible deal from it.

Gaskin was addressing an oil and gas seminar organized by the Private Sector Commission earlier today.

The workshop which is being hosted at Duke Lodge Hotel in Georgetown is being held under the theme: “Oil and Gas in Guyana: Perspectives for the Local Private Sector.