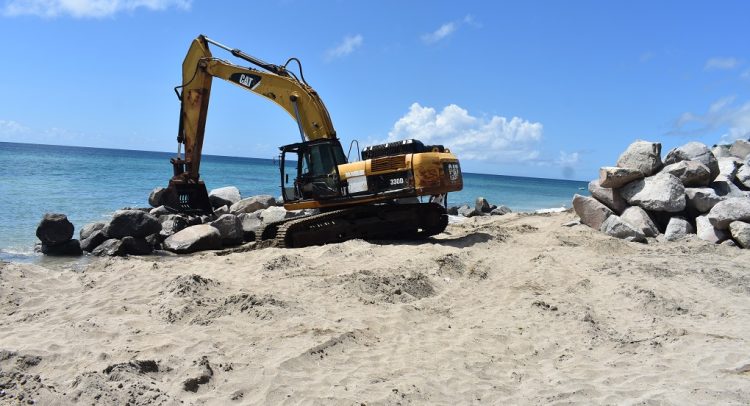 Basseterre, St. Kitts, January 20, 2021 (SKNIS): The Team Unity Government of St. Kitts and Nevis in its efforts to further enhance the beauty of ‘de strip’ located in the Frigate Bay area has embarked upon a beach nourishment project.

He said, “We have actively engaged with Warner (Smith-Warner) out of Jamaica for the last three years whereby they did the necessary groundwork in determining exactly what the beach nourishment project should be.

“After Smith-Warner finished their work in terms of the project, we then engaged the marine brothers who are two young marine engineers in St. Kitts to further the project,” he added.

Minister Grant stated that “The project is costing us in the region of six (6) million dollars which involves putting in groynes and breakwaters over at the Frigate Bay to make the beach enhanced.”

A groyne is a relatively long and narrow coastal defense structure, orientated at approximately right angles to the shoreline. Groynes are used to control the natural alongshore movement of beach material under the action of waves and tidal currents.

A breakwater, however, is defined as a large concrete or stone barrier that is built from the coast out into the sea to protect the beach or harbour from big waves.

The honourable minister stated that “At this point, we are about three months away from completion; we met up with a challenge which was when we went to the bottom of the ocean there were some reef remains, and so we had to go back to the drawing board with the marine engineers to determine what exactly we would do.”

“Having sorted that out over the holiday period, the contractors both on the landside and the seaside are now engaged,” he said.

Minister Grant said that “One of the groynes has been completed and the other groin is expected to begin in the next two weeks and then what would happen is that we are going to pump sand from an area outside in the sea which we have found back into the Frigate Bay area.”

Eight thousand (8000) cubic meters of sand are expected to be pumped during this process.

“The effect hopefully with the groynes and the breakwaters and the sand coming in I am advised that that should now ensure that the sand is retained and we have a much wider beach and a much more pleasant beach and we could see the economics of it returning to the strip owners and bar owners in the Frigate Bay area,” Minister Grant said.

“We are hopeful that this would mean that the sand will not be removed again when there are heavy movements in the sea,” he added.

'Miracle' at the Gabba as record-breaking India stun Australia