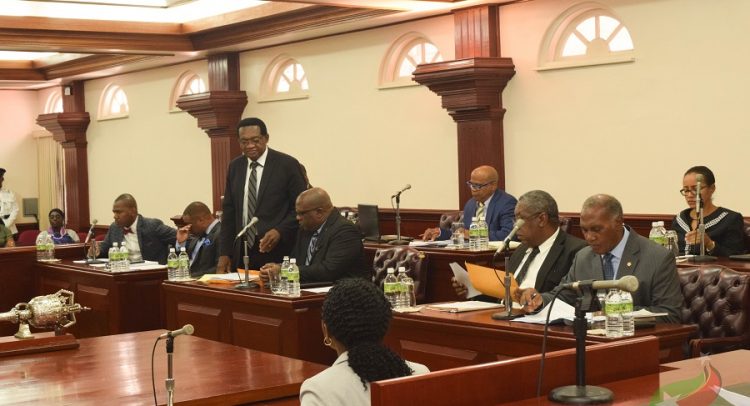 Basseterre, St. Kitts, July 13, 2018 (SKNIS): During the sitting of the National Assembly held on July 13, Minister of Human Settlement et al, the Honourable Eugene Hamilton, gave some vital updates on projects that are taking place in his ministries.

While speaking on his recent travel to Mexico, Minister Hamilton announced that he signed an agreement for a ghaut stabilization project which is important for the safety of commuting residents, especially in the city area. He indicated that the project will start with the College Street Ghaut, which is a safety hazard for motorists and pedestrians during heavy rain fall.

“This ghaut stabilization is very important to us. The work will be concentrated on College Street Ghaut. I’m sure that you are aware Mr. Speaker that this is one of the ghauts that when heavy rains fall creates a serious hazard to persons who operate in the business places downtown and sometimes shutting off our main road,” he said.

Minister Hamilton also commented on the Spooners Ginnery Restoration Project, stating that phase one has begun thanks to a grant received from United States Ambassadors Fund for Cultural Preservation in the sum of approximately USD $68,000.00 and EC$ 300,000.00 from the Ministry of Finance.

“I want to thank the Ministry of Finance for supporting us with an additional EC$300,000.00 to be able to undertake the first phase of that project,” he stated.

He also touched on the housing programme, highlighting that houses have been built in almost all constituencies since the government came into office in 2015. He also noted that programmes like the HELP have assisted residents in doing minor repairs to their homes. He said that to date, the programme has allocated more than $EC 1.5 million with a total of EC$ 3 million to be disbursed before the programme ends.

“HELP is a successful programme. The people out there are getting help now that the Team Unity Administration is delivering to them from the HELP Programme,” he said.
-30-

Summer Heat Waves Raise Risk for Heatstroke… Are You Prepared?

German FM: Europe can no longer fully rely on the US