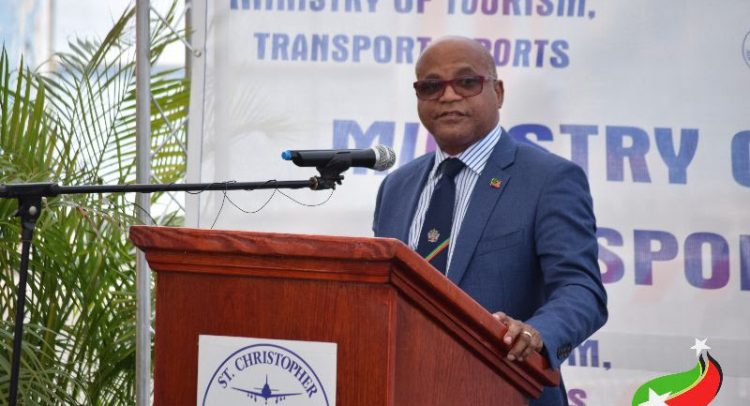 The Minister with responsibility for Transport, the Hon. Lindsay Grant, praised all responsible for the historic construction and completion of the Federation’s Westline Bus Terminal during the opening ceremony on September 22.

“What we are witnessing here this morning is the end result of a process that has taken much cooperation, coordination and unity of purpose to achieve a desired outcome,” said Minister Grant.

“In the final stages of the construction of this facility just over a month ago for example, Mr. Nicholson Rambo Webster, President of the Westline Bus Association approached me and the Minister of Transport and Ports with a graphic design and his ideas for the eventual layout of this terminal,” he said.

“And to ensure an inclusive and harmonized approach, discussions ensued between the Ministry and the bus associations using the facility of the Traffic Department, the Ministry of Sustainable Development and SCASPA”, said Minister Grant.

He highlighted that the decision was taken to implement a two week trial from Wednesday the 26th of August to Wednesday the 9th of September 2020 and that it was agreed that this would test the theory of Mr. Webster’s design and provide the concrete real-world data needed for decision making.

“I am happy to announce that this approach proved to be sound and very useful. Much of what was proposed has been implemented with a few modifications here and there. What we are seeing here today is not just here by chance, it is the result of citizens being proactive, being efficient and being disciplined enough to calculate how often buses leave the terminal at peak times,” he said.

“The Westside Bus Terminal speaks eloquently to the Unity Government’s commitment to ensuring the safety and comfort of those who provide and those who rely on our public transport system,” said the honourable minister.

Minister Grant stated that the facility must also signal a reset on how the business of public transportation is conducted.

“Bus operators to match the modern design of this new facility, you must also elevate your standards of customer service, you must exhibit an unswerving commitment to discipline and order at the terminal and on the road as you take your passenger to and from their destinations in comfort and in safety,” he said

“You must follow the dispatch rules and systems that are in place to ensure that you and your fellow bus operators have a fair and equitable chance to make a living,” said Minister Grant.