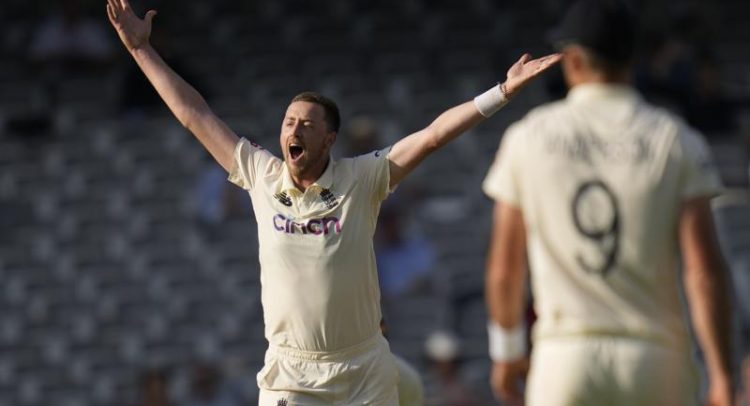 The British government called on England’s cricket authorities on Monday to reconsider the suspension of fast bowler Ollie Robinson while he is being investigated for making discriminatory posts on Twitter from 2012-13.

Culture Secretary Oliver Dowden weighed in on the matter a day after Robinson was told by the England and Wales Cricket Board he could not play for England while there is an investigation into the racist and sexist tweets he posted as a teenager.

“Ollie Robinson’s tweets were offensive and wrong,” Dowden said on Twitter. “They are also a decade old and written by a teenager. The teenager is now a man and has rightly apologized.

“The ECB has gone over the top by suspending him and should think again.”

Robinson made his test debut in the first match of the series against New Zealand last week at Lord’s, taking seven wickets in two innings and also hitting 42 in England’s first innings.

The tweets he posted when he was 18 and 19 resurfaced during the first day of the test and Robinson was close to tears as he issued an apology after stumps. He played the rest of the match and was suspended a few hours after it finished in a draw on Sunday.

Robinson can still play for his county side, Sussex.

The saga was deeply embarrassing not just for Robinson but also for the ECB, with the tweets resurfacing hours after England’s players shared a “moment of unity” with their New Zealand counterparts by wearing T-shirts designed to show a collective stance against discrimination of all kinds.

“It was disappointing for us as a group,” England coach Chris Silverwood said. “It is a stark reminder of the responsibilities we hold in the positions we are in. Obviously there is absolutely no place in this game for any form of discrimination.

“The big thing for Ollie is education. We are all striving to be better. None of us are perfect. And we all need to follow through on the education to make sure we are learning all the time, we make the world a better place and that this great game is inclusive for everybody.”

Silverwood said Robinson was “devastated, embarrassed and very remorseful” about his conduct.

Asked if the matter could end Robinson’s international career, Silverwood said: “The investigation will happen and any decision will be taken after that. Let’s see what they find first.”

The BBC has reported that, as part of the investigation, the ECB must determine whether Robinson had a professional contract at the time of the tweets. He said during his apology on Wednesday that the tweets were sent during a tough period in his life after he’d been fired by English county Yorkshire.

If Robinson had a county contract at the time, the Cricket Discipline Commission — a body independent of the ECB — will take over the running of the investigation.

England added spinner Dom Bess to the squad for the second test starting Thursday at Edgbaston as cover for Jack Leach, who is set to start after being left out at Lord’s to accommodate an all-seam attack.

Dogs to benefit from sale of monkey meat, says Department of Agriculture