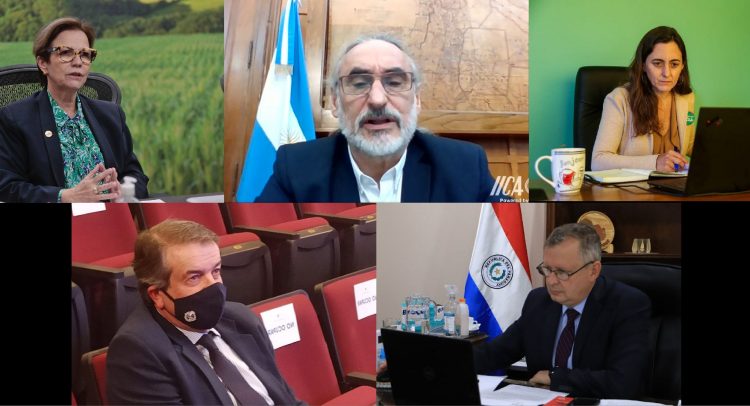 Ministers of Agriculture of Argentina, Brazil, Chile, Paraguay, and Uruguay agree to coordinate actions ahead of the UN Summit and to support the reelection of the IICA Director General

Montevideo, 6 May 2021 (IICA) – The ministers of agriculture of Argentina, Brazil, Chile, Paraguay, and Uruguay emphasized the need for alignment in order to consolidate the region’s position at the UN Food Systems Summit. They highlighted IICA’s key role in fulfilling that objective and expressed support for the reelection of the current Director General of the international organization specializing in rural and agricultural development, which is headquartered in Costa Rica.

At the meeting, which was also attended by Manuel Otero, Director General of IICA, and Alejandra Sarquis, Technical-Administrative Secretary of CAS, the cooperation agreement between the Council and IICA was renewed for an additional four-year period, during which time the international organization will continue operating as the technical secretariat of the forum for consultation and coordination of regional actions. The regional forum, which is currently presided over by Minister Bertoni, also includes Bolivia.

Minister Tereza Cristina remarked that, “As Minister Bertoni has proposed, we need to unify our message on food systems, as a region. I am thankful to Manuel Otero for his efforts in this area. We must emphasize that food systems will be key to guaranteeing global food security for the 10 billion people of the future, while enabling social inclusion and contributing to environmental preservation. We must address food systems and sustainability as a whole. The concept must be addressed holistically and from all angles”.

The Brazilian minister also expressed support for Minister Basterra’s proposal to request that IICA “prepare a report on the sustainability of our livestock production systems”, emphasizing that “all of our countries’ technical and diplomatic resources will be required to ensure that the voice of South America is heard at the Summit”.

Moreover, Minister Tereza Cristina appealed to her colleagues to make a joint declaration of support, within the framework of CAS, for the reelection of Manuel Otero as Director General of IICA.

“It is the Brazilian government’s opinion and my own that IICA provides an essential service in advancing agriculture in the region [and], under the leadership of my friend Manuel Otero, this has been even more significant. His contribution to our coordination efforts for the Food Systems Summit is an example of this. In reaffirming both my personal support for the Director and that of Brazil, I would also like to ask all the ministers of CAS for their support in making that declaration”, she stated. Her request was met with her colleagues’ full support.

Minister Luis Basterra of Argentina indicated that “the members of CAS are large producers of animal proteins and we are well aware that the methods we use are quite unlike the methodologies used by those who process grains almost exclusively and that generate differentiated elements when evaluating the impact of our livestock production compared to other regions”. He expressed decisive support for the performance of the current IICA administration.

Like his other colleagues, Basterra then confirmed Argentina’s full support for “the continued tenure of our friend Manuel Otero as Director General of IICA”.

Minister María Emilia Undurraga of Chile commented that food systems should be thought of as chains. Rather than placing the emphasis solely on production, the concept should include the food itself and consumption.

“This creates a major challenge as we are compelled to broaden the conversation and our coordination with other ministries. If we are to build these food systems, we need to create a balance between the three pillars of sustainability—productive, social and environmental factors—to promote a comprehensive view that fuels the development of communities and territories”, she stated.

In turn, Minister Carlos María Uriarte of Uruguay stated that “we need to fight to establish an agriculture sector that is economically viable, socially responsible and environmentally sustainable and regenerative”.

Furthermore, Minister Bertoni of Paraguay emphasized that “we have made very important agreements to continue moving forward, as a result of the teamwork between the Technical Secretariat of CAS, IICA, the directors of agricultural policies in the different ministries, as well as the specialists”.

After stating his appreciation for the support, the Director General of IICA declared that “my main mission is to continue driving the transformation of IICA toward the future and, believe me, I am focusing all of my efforts in that direction”. He also welcomed the renewal of the cooperation agreement between the organization and CAS.

He offered the ministers the organization’s full support in taking their regional vision beyond the confines of the continent, encouraging meetings between the countries of CAS and the Central American Agricultural Council, the Andean Agricultural Forum and the ministers from the Caribbean and North America regions.

Do not wait to vaccinate, CMO Laws says as campaign hits 10th week