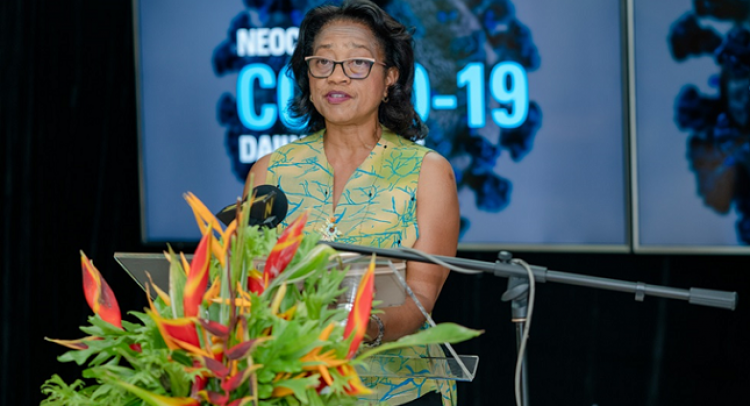 “We have a team of trained contact tracing personnel who engage all the cases, compile the list of significant contacts who are then interviewed, placed in self-quarantine for 14 days and tested,” said CMO Dr. Laws on the June 15 edition of Leadership Matters. “The team reached 1887 contacts already and has officially released 1238 individuals to date. There are 649 persons remaining in self-quarantine. Most of the recent cases have been identified through the contact tracing process and a small percentage of those cases are persons who walked into the emergency room. However, we are still able to link most of these individuals to previously identified cases,” Dr. Laws added.

Dr. Laws indicated that COVID-19 testing is critical and is part of the Ministry of Health’s response to fighting the virus.

“In four weeks, we have tested over 5,395 persons with 199 positive results returning, with a positivity rate of approximately 3.7 percent. In essence, we have tested 11.4 percent of the entire population in just under four weeks, said Dr. Laws. “Last week, the Ministry of Health sent samples to the Caribbean Public Health Agency (CARPHA) for genomic sequencing and from this information, we will find out the variant of the SARS-CoV-2 virus that is presently in circulation.”

An extremely important and effective measure to date is St. Kitts and Nevis’ COVID-19 Vaccination drive which began in February 2021. According to CMO Dr. Laws, within four months, the Federation has achieved a commendable coverage rate. She noted that 66.3 percent of the Federation’s target population is covered with the first dose of the vaccine, while 31 percent is covered with the second dose or fully vaccinated. Dr. Laws further added that as of June 15, “21.7 percent of the total population is fully vaccinated and when compared to the other islands in the Eastern Caribbean Currency Union (ECCU)” St. Kitts and Nevis is “doing very well.”

On Friday, June 11, Prime Minister Dr. the Honourable Timothy Harris, announced a period of restrictions of movement. In an effort to halt the spread of COVID-19, further restrictions were implemented for the next two weeks including a partial curfew from 6 p.m. nightly to 5 a.m. daily. The Governor-General, His Excellency Sir S.W. Tapley Seaton, issued a proclamation dated June 15, 2021, declaring a State of Emergency. The Proclamation came into effect from 6 p.m. Tuesday 15 June, 2021, until 11:59 pm on Tuesday 06 July, 2021.

“This health public measure was implemented based on where we are along the epidemic curve and based on the rising positivity rate. The principle behind this public health intervention is to reduce social interaction and ultimately break the chains of transmissions of the COVID-19 virus,” said Dr. Laws. “However, its effectiveness still depends on adherence to the non-pharmaceutical measures during the partial lockdown.”

CMO Dr. Laws said that the public health interventions are working. She noted that the Federation received commendation from Dr. Yitades Gebre, PAHO/WHO representative to Barbados and the Eastern Caribbean, as he expressed “confidence in the technical team in the Ministry of Health and underscored that St. Kitts and Nevis is on the right path in response to the outbreak.”

Police asking for your help to find Bobo