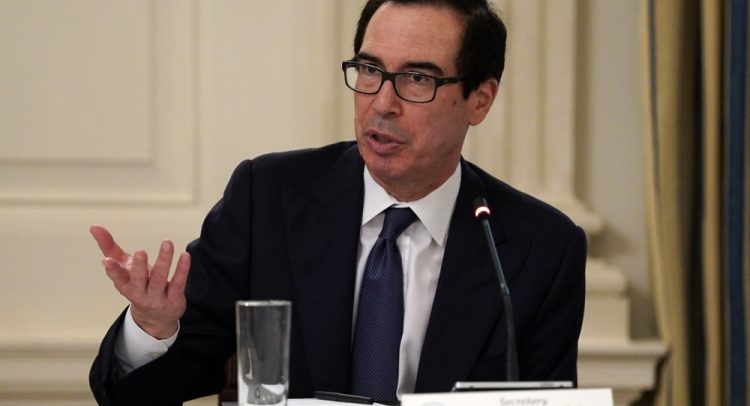 By CHRISTOPHER RUGABER and MARTIN CRUTSINGER,

Lawmakers from both parties have criticized the Payroll Protection Program, which initially provided $349 billion in forgivable loans to small companies but has been plagued by a host of problems. Many businesses were unable to get loans before the initial funding was exhausted. A second round of loans faced computer processing delays and a number of publicly traded companies ended up receiving money that Mnuchin demanded be paid back to the government.

Mnuchin and Federal Reserve Chair Jerome Powell will testify Tuesday at 10 a.m. before the Senate Banking, Housing and Urban Affairs Committee. The hearing is the first oversight review of the huge relief legislation approved in early March.

Mnuchin said in prepared testimony that so far, the paycheck program has processed more than 4.2 million loans for over $530 billion “to keep tens of millions of hardworking Americans on the payroll.” The loans do not have to be paid back as long as the borrowing business uses 75% of the money to cover workers’ paychecks.

But many small firms say the terms are too onerous. To get the loans forgiven they have to rehire all their employees within eight weeks of receiving the funds, even if they have little business or work for them to do. These firms argue they may simply have to lay their workers off again at the end of the eight weeks, and have little money left to help them ramp up when business does return.

Mnuchin also said that the $1,200 stimulus checks from the relief package have added up to $240 billion in direct payments for millions of Americans, with a typical family of four receiving $3,400. Late Monday, Treasury said that this week it is sending out nearly four million payments on prepaid debit cards. The payments were approved in late March, though Treasury warned that it would take time to issue the funds to those without bank accounts.

On Monday, a separate congressional oversight panel said that the Fed and Treasury have spent very little of the $500 billion that Congress allocated to support businesses hurt by the coronavirus outbreak. The oversight panel also asked how the two agencies would evaluate the success of their programs.

For his part, Fed Chair Powell pledged to reveal the names and other details of the entities that borrow from the emergency programs the central bank has set up to offset the economic hit from the viral outbreak.

In his prepared testimony, Powell said the central bank will disclose the amounts borrowed and the interest rates it levies under its programs to provide credit for large corporations, state and local governments, and medium-sized businesses.

“We are deeply committed to transparency, and recognize that the need for transparency is heightened when we are called upon to use our emergency powers,” his testimony says.

The Fed had already pledged to publish the names of its borrowers from its Main Street Lending program, and some of its other lending efforts. The Main Street program, which has not yet been launched, has already attracted scrutiny from environmental groups, which charge that oil and gas drillers, most already heavily indebted, will use it as a lifeline.

In the 2008 financial crisis, the Fed faced widespread criticism for the opaque nature of the lending programs it launched. It has revived many of those programs to smooth the flow of credit in the current crisis.

Powell said the Fed will also name the companies that benefit from its two facilities that have started to purchase corporate debt, as well as its program to purchase municipal bonds and a facility that will buy securities backed by auto, student, and credit card loans.

The Fed chair also reiterated that central bank will use “our full range of tools to support the economy in this challenging time.” In a “60 Minutes” interview Sunday night, Powell said the Fed’s ability to support the financial markets and economy are essentially unlimited, helping to spark a stock market rally Monday.

In the “60 Minutes” interview, Powell also repeated his view that Congress and the Fed must be prepared to provide additional financial support to prevent long-term damage to the economy from widespread bankruptcies among small businesses and long-term unemployment. Congress has already approved roughly $3 trillion in rescue aid for individuals and businesses. But states and localities say they are in need of federal money to avoid having to cut jobs and services, and legislation to provide that money remains at an impasse in Congress.

Photo: Treasury Secretary Steven Mnuchin speaks during a meeting with restaurant industry executives about the coronavirus response, in the State Dining Room of the White House, Monday, May 18, 2020, in Washington. (AP Photo/Evan Vucci)