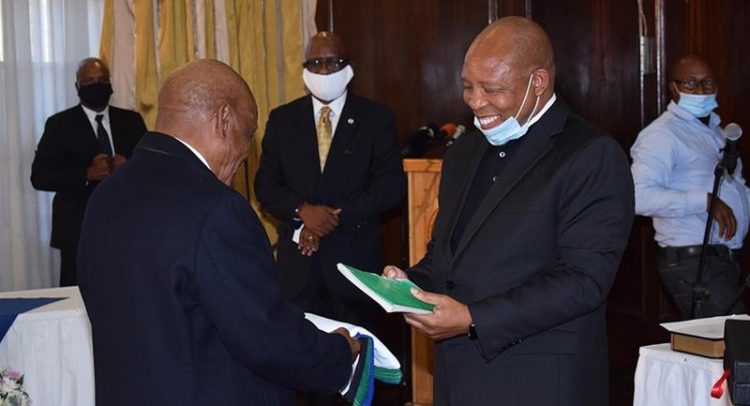 Moeketsi Majoro has been sworn in as Lesotho’s prime minister following the resignation of his embattled predecessor, Thomas Thabane.

Thabane’s decision to step down on Tuesday came amid mounting pressure over a case in which he and his current wife are suspected of involvement in the 2017 murder of his estranged wife. They both deny this.

The move cleared the way for Majoro, a seasoned economist and Lesotho’s former finance minister, to take the reins.

Thabane attended Wednesday’s swearing-in ceremony at the royal palace of King Letsie III, handing his successor a copy of the constitution to formally signal the transfer of power.

The men tapped elbows instead of shaking hands, and Majoro wore a face mask as a precaution against coronavirus.

“I will be a true and faithful prime minister, so help me God,” said Majoro, who previously worked as an executive director at the International Monetary Fund.

Thabane’s former wife, Lipolelo Thabane, was murdered in 2017, just two days before he took office. The couple were in the midst of a divorce when she was shot outside her home, sending shockwaves through the tiny mountainous kingdom.

Two months later, he married his current wife Maesaiah Thabane, 43, who is considered a co-conspirator to the killing. She has been charged with murder and is out on bail.

Maesaiah Thabane was absent from Wednesday’s swearing-in ceremony, where her husband apologised for shortcomings during his nearly three years in office, his second stint as prime minister.

“In as much as I tried my level best to serve His Majesty and Basotho [people] with dedication and loyalty … I may have inadvertently erred in several ways during my tenure as prime minister.

“Consequently, I sincerely wish to ask you to forgive me for my mistakes,” said Thabane.

His election in 2017 had brought hopes of stability to Lesotho, which has a long history of political turmoil.

Thabane’s own All Basotho Convention (ABC) party, opposition figures and South African mediators had pressured him to quit, but he had resisted, supported by an inner circle of loyalists.

“It is going to be very difficult for (Majoro) … to unify the ABC because its members are still disgruntled and are going to fight,” independent analyst Lefu Thaela said.

Majoro, who has also served as planning minister, is seen as a technocrat, better at analysing economic data than soothing tensions between rival political factions.

“He has been part of the warring sides himself,” Limpho Tau, leader of the Democratic Congress party, told Reuters. “It is not going to be easy to satisfy everyone.”

Majoro, who was first appointed into cabinet by Thabane in 2013, promised on Wednesday to usher in “a new version” of leadership and “bring back their (people’s) trust to the government”.

He also promised to make tackling COVID-19 – Lesotho has recorded one case so far – poverty, and unemployment his main priorities.

Majoro will serve out Thabane’s remaining term before the next round of elections in 2022.

“We don’t have much time on our side. We only have two years left before the elections, yet there is a lot of work ahead of us.

“Fifty-four years after independence, the scourge of hunger and poverty is a serious issue in this country, and we need to deal with this issue decisively,” he said.