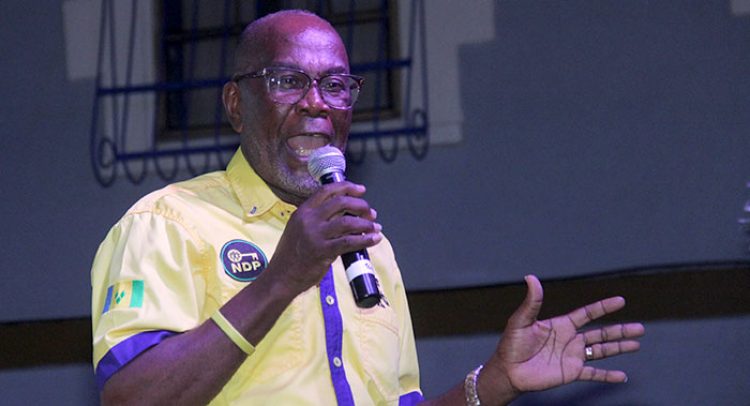 Member of Parliament for Central Kingstown St. Clair Leacock has praised his constituents for their continued support for the New Democratic Party as yet another Unity Labour Party candidate garnered even less support in the district.

Leacock was elected to a third consecutive term as MP for the area in the Nov. 5 general elections when he secured 2,642 votes against 1,965 for the Unity Labour Party’s Dominic Sutherland.

He said that between 1998 and 2020, the ULP has gained 78 votes in Central Kingstown while his New Democratic Party (NDP) has attracted a further 1,085 votes.

He noted that the results mean that he has erased the 448-vote deficit that the NDP lost the seat by in 1998 and has added a 600-vote lead.

“Even if I didn’t run in the next election, New Democratic Party wins,” Leacock told the NDP’s “Thank You” rally in Kingstown on Saturday.

“It is statistically impossible for them to win us in the Kingstown. And I am even stronger now that I have Fitz Bramble guarding the east and Daniel [Cummings] protecting the West,” Leacock said, refereeing to his NDP’s colleagues, who are MP for East and West Kingstown.

He said that Central Kingstown is a “beacon of example” to the nation.

“You can bring Love Box, you can bring hate box, or even if you can’t box. There is no way, Jose, you can win a seat in Central Kingstown in St. Vincent and the Grenadines.”

The ULP has been returned to office for an historic fifth consecutive term, having won nine of the 15 electoral seats.

However, the party lost the popular vote for the first time since 1998, meaning that more Vincentians voted for the NDP to be in government than did for the ULP.

“And I promise you, it will not be easy for them over in the months, ahead. I didn’t say years, the months ahead because we will make it very unfavourable for them to govern in this St. Vincent and the Grenadines,” Leacock said of the ULP administration.

Leacock told NDP supporters that he knows they are disappointed that the party did not win the election.

“I am, too, but we praise you tonight for standing stoically or standing strongly,” he said, adding that he understands “the pain and agony” of fellow NDP vice-president Roland “Patel” Matthews, a two-term MP for North Leeward who lost by one vote.

“It couldn’t be easy, Patel, to withstand $2 million of bribe in North Leeward. Had to be a tsunami. But he has stood and we have stood shoulder to shoulder behind him.

“It could not be easy in central leeward for Ben to withstand the millions that came by there. But that’s not how elections should be fought”

Ben Exeter, the NDP’s candidate for Central Leeward, who was making his second attempt to win the seat, lost by 503 votes to newcomer Orando Brewster of the ULP.

Leacock said that the NDP and its leader, Godwin Friday, MP for the Northern Grenadines, are “steeled and determined that we have one mission, to build a better nation, to bring our people together, to end divisiveness and to make sure that all of our people can be proud so that one day, as my colleagues have said, in unison and in one voice, all of us in the New Democratic party will sing that great song make popular by our own Martin Luther King, Free at last, Free at last, Free at last. Thank God the New Democratic Party has freed us, at last.”

Leacock said he has represented the NDP in various capacities in 10 electoral outings since 1984.

He said that on a number of occasions during the 2020 election campaign, he was tempted to tell party supporters to “take a good look at the Major”, a reference to the military rank he retains from his service in the Cadet Force.

Daniel Cummings, who was elected to a third term as MP for West Kingstown, used Saturday’s meeting to address speculations about his future in politics, telling party supporters that he was committed to finishing what he started.