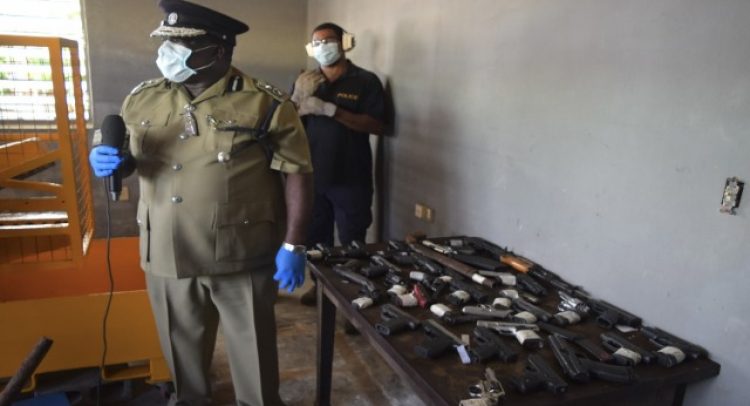 Basseterre, 30th September, 2020 (MyVue News.com)- Almost 50 firearms were recently destroyed by police in St. Kitts and Nevis, as part of an ongoing exercise to make the streets and communities much safer.

Commissioner of Police, Hilroy Brandy, while commenting on the operation, gave assurances to the public that since the effort of removing the firearms from the street, his officers are still continuing to make certain that the streets and homes in all communities are safe from illegal firearms.

He said, “We have taken seven (7) firearms off the streets so far for this year. Notwithstanding we are in a pandemic, Police are still out searching and doing stop and search (exercises) in order to recover anyone with any illegal firearm.”

In 2019, the Commissioner of Police followed through on a commitment given last year to destroy all the firearms that had been collected as part of the Peace Initiative.

Giving brief remarks before the activity began, Commissioner of Police, Hilroy Brandy said to those present, including media representatives, “…once we (did) our investigations, we promised that all the weapons would be destroyed…you are here to witness that all thirty firearms will be destroyed this afternoon, and to assure you that none of the firearms [are] back on our streets.”

Since February 2019, members of gangs in the Federation have been a part of a Peace Initiative which has had several significant outcomes.

Demonstrative of their level of seriousness to the peace effort, members relieved themselves of their weapons last year.

As a result, thirty (30) firearms and a number of ammunition were handed over to the Police. These weapons have been audited by the Forensic Unit and underwent ballistics.

Additionally, a firearm that was taken into custody by the Police earlier this year as a part of the same initiative was also destroyed on Monday.

When combined with the thirteen (13) illegal firearms taken into custody through various operations in 2019, a total of forty-three (43) firearms were removed from the streets of communities around the Federation last year.

This was unprecedented, said Brandy.

Shell to cut up to 9,000 jobs as oil demand slumps