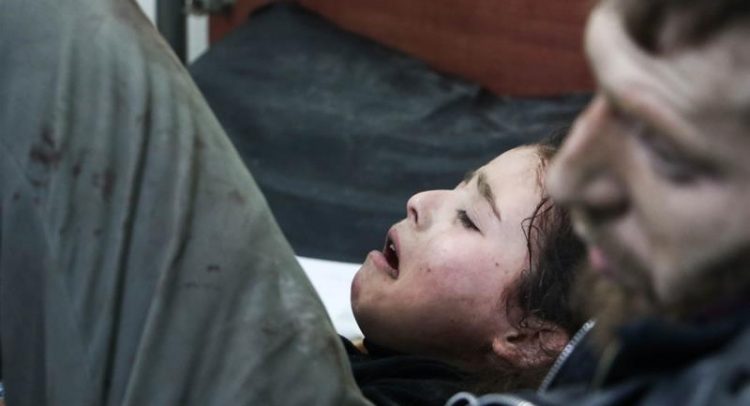 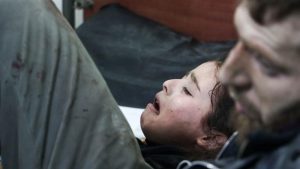 Russian and Syrian government forces have killed at least 136 civilians over the past 48 hours in Eastern Ghouta, a suburb of the capital Damascus, according to residents and monitoring groups.

On Monday, 30 civilians were killed in air raids; on the following day, 80 more were killed, and on Wednesday, another 26 were killed.

At least 22 children and 21 women were among the dead.

“Scenes of entire buildings, housing whole families crashing down with the residents – women, children and men – still inside have become a frequent image,” Abu Salem al-Shami, a resident and activist, told Al Jazeera by phone from Eastern Ghouta, an area that has been under opposition control since 2013.

The Syrian Observatory for Human Rights (SOHR), a UK-based monitoring group, says Tuesday marked the “largest massacre in Syria” since April’s chemical attack on Khan Sheikhoun in Idlib province when more than 80 people were killed.

Eastern Ghouta’s proximity to the capital – where the government of President Bashar al-Assad resides – renders it a key target for the government and its principal ally, Russia.

Assad’s forces have enforced an ongoing military siege on the area since 2013 in an attempt to drain the armed opposition groups there.

While Eastern Ghouta, home to some 400,000 people, has been under constant bombardment since then, there has been an uptick in air raids in recent months as it is one of the last remaining opposition strongholds in Syria.

“People on the outside think that Russia and the Syrian regime are killing armed fighters, but this is completely false. Only civilians are being targeted – regular civilians, the people of Damascus,” al-Shami, who lost 10 of his immediate family members when their building was attacked last April, said.

According to the SOHR, 369 people have been killed in Eastern Ghouta, including 91 children and 68 women, since the end of December.

‘People eat one meal a day’

Eastern Ghouta was meant to be one of several “de-escalation zones” agreed upon a year ago by Russia, Iran – both government allies – and Turkey – a backer of the armed opposition. The deal was meant to result in an end to the violence and provide safety to civilians. But it has not been implemented.

Due to the siege, very little humanitarian aid has entered, making access to basic supplies such as food, highly restricted. Medical supplies are also scarce.

According to the United Nations, nearly 12 percent of children under five in Eastern Ghouta suffer from acute malnutrition – the highest rate ever recorded since the start of the war in Syria.

At least five children – out of more than 130 – have died as a result of the lack of medical supplies.

The last United Nations aid convoy allowed to enter was in November 2017, according to al-Shami.

Since then, at least 12 people have died of starvation – including four children and two women – according to the Syrian Network for Human Rights.

Al-Shami says many have resorted to begging. “The price of food in the markets is extremely high. People eat one meal a day. There are many people begging on the streets – children, old men. It’s a huge problem.”

To keep themselves warm during the cold winter months, families have been burning furniture. “Wood is expensive. They burn wardrobes, chairs – anything made of wood. That has become our reality,” he said.

Fadel Abdul Ghany, founder of the Syrian Network for Human Rights, says that the military campaign against Ghouta intensified in mid-November.

According to his group’s records, some 19 markets, seven medical centres, six schools, three kindergartens and 10 civil defence centres, have been attacked since then.

“What is happening in Ghouta is proof that the de-escalation deals are a complete failure. What’s worse is that the international community cannot do anything to stop the siege,” Abdul Ghany told Al Jazeera.

In 2013, Eastern Ghouta was the target of a suspected government chemical weapons attack that shocked the world.

According to some estimates, warplanes dropped about 1,000kg of the deadly nerve agent Sarin on the area, killing more than 1,000 people, the majority of whom were civilians.

Despite government claims that it no longer possesses chemical weapons, the area witnessed at least three other smaller-scale chemical attacks in recent weeks.

Abdul Ghany believes that the increase in attacks on the area is tied to a Russian-organised diplomatic conference held in January.

Russia, which entered the war in support of Assad in 2015, has largely taken over efforts to find a political solution to the conflict in Syria after it helped turn the balance of power in favour of Assad’s government.

Last month’s conference, held in the Black Sea resort of Sochi, was boycotted by the opposition who claimed that the Russian and Syrian governments had no interest in a real political solution and are trying to ‘win’ the war through military might.

“The government and its allies have increased their bombardment of Ghouta to send a message to the opposition there. They want to tell them: if you don’t want to comply with our vision for a solution, then your fate is to die,” said Abdul Ghany.

With Iran and Russia on its side, the Syrian government has been able to regain control across the majority of Syria. The war, which began in 2011 when peaceful protests broke out, has transformed – according to the Syrian government narrative – into a war against “terrorists”, due to the presence of former al-Qaeda affiliated armed groups.

But in Eastern Ghouta, like many areas across Syria, civilians have borne the brunt of the fighting.

At least 470,000 people have been killed, and over 12 million Syrians – half the country’s prewar population – have been driven from their homes.

“The pain and suffering we’re witnessing in Eastern Ghouta is indescribable,” said al-Shami.

The Dutch Are Taking Over The Government of St Eustatius