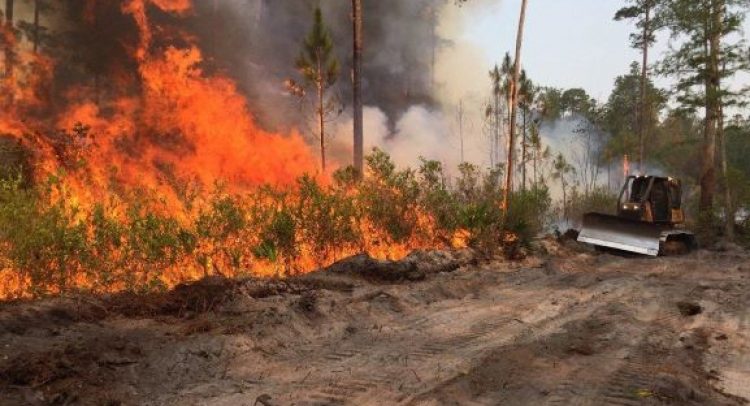 Basseterre, St. Kitts, May 14, 2021 (SKNIS): St. Kitts and Nevis Fire and Rescue Services is cautioning the general public to cease and desist from lighting wildfires as most of them are willfully done.

During an interview on the popular radio and television show ‘Working for You’ on May 12, 2021,
Fire Sub-Station Officer Level Two, Rommel Williams, and Sub-Station Officer, Timothy Martin explained the causes of wildfires in the Federation

Mr. Williams said that the causes of wildfires vary as wildfires can either occur naturally or through human activity. However, it is his belief that most of the fires which occur within the Federation are deliberately caused.

“We are hoping through our sensitization programmes that persons would understand the importance of not deliberately lighting fires,” said Mr. Williams. “We are saying to persons that you cannot just burn anymore.”

“Once ago we would have given persons permission to burn and you could have easily said that we would have contributed in some way because we gave them the permission to do it, but realising the risks now, we stand back and say that we cannot do that anymore,” he said. “We encourage persons not to light fires.”

He said that they have seen a pattern of most fires occurring during March and June, which has led the department to name it the “peak fire season” where the dry weather is also conducive for wildfires.

“Sometimes you could see after the fires would have been extinguished, maybe a week or two weeks later, you would see the land is properly farmed, so persons burn for clearing and sometimes unintentionally if you don’t control the fire, you don’t know how far it’s going to spread. They light the fire, and they don’t even stay around,” said Mr. Williams while adding that “the fire spreads into other areas and then it causes persons to lose livestock…and even sometimes persons may have businesses where they would have containers, the fire reaches the container and then burns everything inside the containers.”

He further added, “There are also persons who want to dispose of garbage (and) instead of taking it to the landfill they burn the garbage and sometimes when they burn the garbage the fire spreads again and so you started a garbage fire, and it turns into a bush fire because the garbage spreads over into the vegetation and again you have a wildfire going.”

“There are areas where depending on the type of vegetation and the thickness of the grass, the heat in the grass might reach to a point where it actually causes the ignition, but I believe the majority of the time, it is persons just being negligent and deliberately causing fires,” said Mr. Williams.

Timothy Martin, Fire Sub-Station Officer, corroborated what Officer Williams said by adding, “I want to appeal to drivers when they’re driving, don’t flick cigarette butts out the window. He also said that most wildfires are not started from the heat because many of them are in the night.

“I would like to say it puts a strain on our resources,” Officer Martin said.

Dump Trump? Kicking him off NYC golf course may not be easy