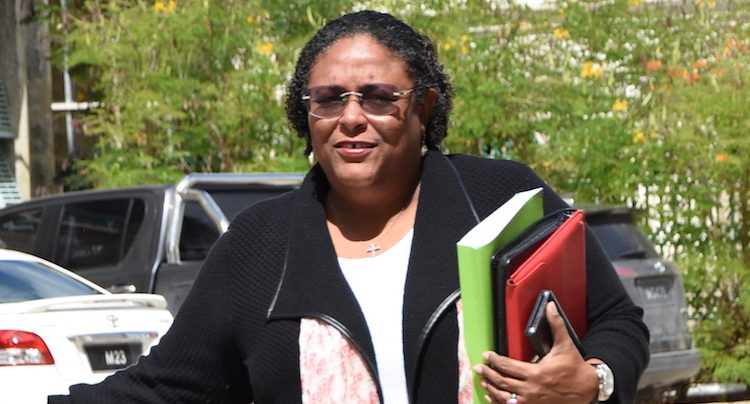 Opposition Barbados Labour Party (BLP) Leader Mia Mottley has taken Minister of Finance Chris Sinckler to task over his latest Estimates presentation, accusing him of engaging in a political charade instead of outlining a solid plan to save the ailing economy.

Likening the dwindling reserves to that of a sick patient losing blood, Mottley said she expected Sinckler to outline the practical actions Government was prepared to take in order to “stop the bleeding” instead of engaging in “the long talk”.

She was responding to the introduction of the 2018-19 Estimates and the Barbados Sustainable Recovery Plan (BSRP) by Sinckler in Parliament today.

Mottley highlighted a number of problems which she said should have been addressed, including ongoing water and sewerage woes, issues of transportation, the backlog of cases in the judicial system and blacklisting concerns.

The BLP leader also questioned the intentions of the Democratic Labour Party (DLP) administration to quickly tackle the rapidly declining foreign reserves, which stood at just 6.6 weeks of import cover, or $410 million as at December last year, as well as the high debt, which was hovering around 140 per cent of gross domestic product.

“We spent [five] hours today discussing a plan that should not even be called the Barbados Sustainable Recovery Plan but should be re-titled ‘Beyond the Mandate’, because there is nothing in here that they can do properly, hardly anything without a mandate from the people of Barbados after the next election. That is a fact,” said Mottley, who will lead the BLP into the next election due by the middle of this year.

“Instead, we are made to stand in here for five hours listening to a minister talk and talk and the patient is bleeding out. A full dissertation when what is required is to stop the patient from bleeding. This Opposition will not engage in this charade in this Estimates and we will speak only to the vital issue that affect this country’s stability and health,” she insisted.

Sinckler had earlier dismissed eight questions posed by Mottley over the weekend, saying he would not be bullied into giving any answers, while describing the tactic as nothing but “a game show”.

However, insisting that Government provides answers to those questions Mottley said they were from the electorate.

“This country will not go forward until a mandate is sought and the people of Barbados decide what it is they are prepared to do to stabilize this country and who should be the people leading that exercise. Until such time we are spinning top in mud and this Opposition will not legitimize that exercise which is an insult to the intelligence of the people of Barbados,” said Mottley as she dismissed the discussion on Government’s estimated revenue and expenditure for the upcoming financial year and the BSRP, which is designed to help reform the public sector, and generate economic growth, among other objectives.

Mottley insisted instead that the population wanted to know what the level of the international reserves were today; the level of Value Added Tax, income and Corporation Tax refund owed to companies and individuals; the level of arrears owed by Government to suppliers of goods and services; how Government intends to get a reduction of $87 million in transfers and subsidies.

She also called on Sinckler to say if the Central Bank had written to him with regard to the adequacy of the foreign reserves and the threat to the monetary stability and what action he intended to take; the current employment level in Government; the amount of currency printed by the Central Bank to buy Government debt in order to keep the Government afloat; and how Government proposes to create the fiscal space to effectively deal with the crumbling infrastructure affecting the country.

“We take no delight in asking these questions and we ask them one by one because they are vital,” Mottley she, as she recalled that the Central Bank, the International Monetary Fund and the Caribbean Development Bank had all warned in recent weeks that urgent action was needed to address the economic situation facing the country.

“It is one thing to have a driver’s licence, it is another thing to be able to drive. This Government has abandoned us. Worse still, the tools that are necessary to fix this country will not be available to us in this Parliament three weeks from today. I ask in the name of the people of Barbados, I ask in the name of this country’s stability, if ever there is an opportunity for this Government to stop and pause and put the national interest first, it is now, and it is not the Opposition that is asking, it is the country,” the BLP leader stressed.

Amazon set to launch its own delivery service