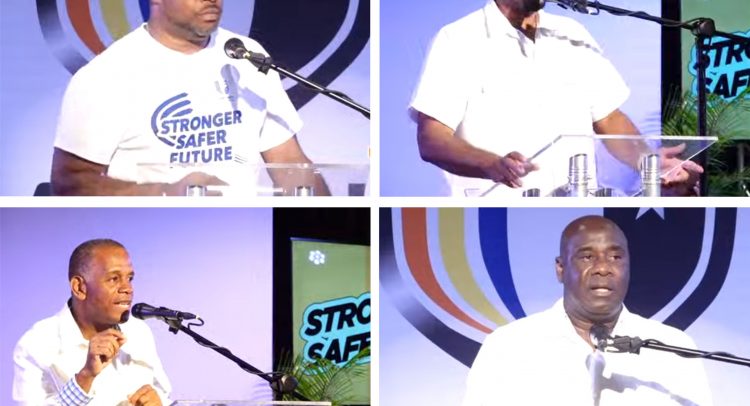 Move ahead to a stronger, safer future with Team Unity advises PM Harris

Unity of purpose was vividly on display Wednesday evening June 3 when the eleven candidates on the Dream Team of the St. Kitts and Nevis’ Governing Team Unity appeared on the Stronger, Safer Future virtual public meeting at the St. Kitts Marriott Resort.

Team Unity leader and Prime Minister of St. Kitts and Nevis, Dr the Hon Timothy Harris took time to thank all the candidates, starting with the three from Nevis and advised the general public that for the country to move ahead to stranger, safer future, they must vote the Team Unity candidates in the June 5 General Election.

After calling out the names of the candidates from Nevis, Prime Minister Harris thanked them “for coming down tonight to share the platform for a stronger and safer St. Kitts and Nevis.”

Turning to the Team Unity Candidates from St. Kitts, he said: “I want to salute all eight candidates on the island of St. Kitts for offering themselves on the 5th of June to carry on the good work to make our country stronger and safer in the future.”

Prime Minister Dr the Hon Timothy Harris who is defending the St. Christopher Seven seat and who made the last presentation, leaving the stage at 12:15 am (Thursday June 4), noted that the question on the mind of every voter on the 5th of June is if they want to move ahead to a stronger and safer future. The answer, which he gave, was ‘yes they do’.

“If you want that stronger and safer future, only one movement, only one slate you must choose from – it is the Team Unity slate,” advised Dr Harris. “Team Unity offers a future where there will be more jobs for our young people and more opportunities for our young people. The stronger and safer future will involve nicer homes, bigger homes for the young and the not so young in St. Kitts and Nevis.”

The Prime Minister added: “Yes, the future belongs to those who are prepared and on Friday you must be prepared to vote for the Team Unity candidates across all eleven constituencies in St. Kitts and Nevis. Do you want to move ahead to a stronger and safer future or you want to go back to a wretched past?”

He noted that there is no future in looking back to a party that was rejected in 2015, one that cannot take the country to the stronger and safer future and warned the electorate against choosing to go back there to the hard times again.

On Friday June 5, Prime Minister Harris advised: “We have to be focused and we have to be out there working hard until the polls are closed. Call your friends, call your family, invite them to vote for the Team Unity candidate, wherever he or she may be – a vote for that candidate of Team Unity is a vote to return the best performing government in living history.”

“I want to appeal to you – come Friday you must get up early,” advised Prime Minister Harris. “Get up early – be first in the line. Whether or not you have the voter’s ID it does not matter. Once your name is on the list, your driver’s licence will do, your passport will do, your Social Security card will do. Don’t worry about your electoral ID if you cannot find it. Any national ID will do the purpose.”