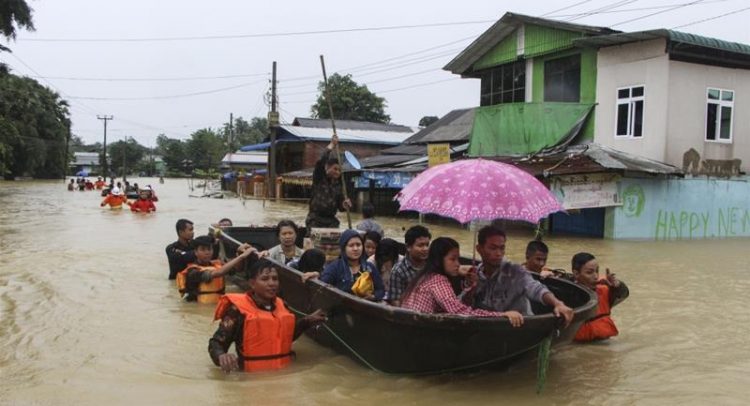 At least 12 people have been killed and tens of thousands displaced in Myanmar after monsoon rains caused flooding across the country, officials said.

“Among the 12 people killed, three are soldiers who were swept away by floodwaters during a rescue operation in northeastern Mon state,” Director-General Ko Ko Naing of the Disaster Management Department said on Thursday.

“Heavy rains are still hampering us from reaching many of those affected places,” he told Anadolu Agency.

An estimated 148,386 people are currently taking refuge in 327 temporary camps in the flood-affected regions.

Nearly 28,000 are still in their flooded homes, either unable to escape to shelters or are opting to stay in the hope that water levels will start to recede, local Myanma Alinn newspaper reports.

“Our house is just beside the river bank so we’re trying to move somewhere higher,” 54-year-old Ohn Myint said.

Farmer and fisherman Win Kyu, 40, is concerned about his fields that now lie completely under water.

“We experienced flooding like this back in 2000. This year is the worst since then,” he said.

“If this goes on, people will struggle to make a living,” Kyu added.

At least 12,140 hectares (30,000 acres) of farmland have been completely destroyed due to the week-long flooding, according to the government.

The country has been facing floods in seven regions since last week as most rivers have exceeded their danger levels by several feet and 36 dams and reservoirs are overflowing due to heavy monsoon rains.

Myanmar experienced severe flooding in 2015 when around 100 people reportedly died and more than 330,000 were forced from their homes.

Delly Ranks on mission to re-capture both soca contests