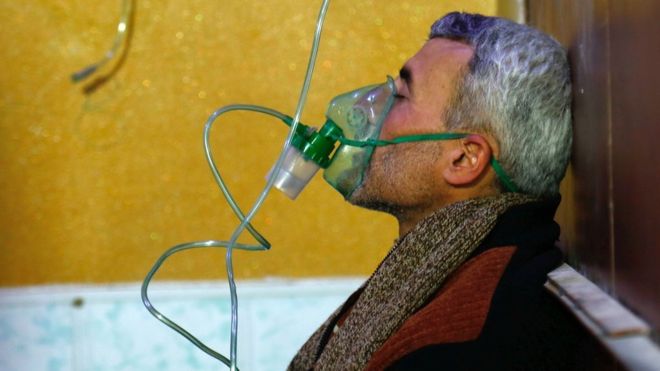 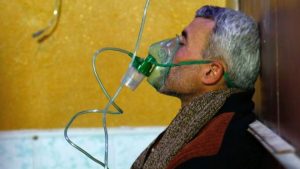 North Korea has been sending equipment to Syria that could be used to make chemical weapons, a UN report says.

Some 40 previously unreported shipments were made between 2012 and 2017, the report found. Materials included acid-resistant tiles, valves and pipes.

The allegations follow new reports of chlorine being used by Syrian forces, which the government denies.

Meanwhile, for a second day, a “pause” in fighting has failed to hold in the Eastern Ghouta region outside Damascus.

The daily five-hour pause was meant to allow aid to enter and civilians to leave the rebel-held area through a humanitarian corridor.

But as with Tuesday, the truce was marred by violence. Activists reported hearing missile strikes and barrel bombs, while Russian Foreign Minister Sergei Lavrov accused “militants” of blocking access to the humanitarian corridor.

What are the allegations against North Korea?

North Korea is under international sanctions over its nuclear programme.

But a confidential report, compiled by a UN Panel of Experts which assesses North Korea’s compliance with UN resolutions, found evidence of illicit supplies sent to Syria.

The report, which has been seen by the BBC, details the “innovative evasion techniques” used by North Korea to send items such as high-heat, acid-resistant tiles, corrosion-resistant valves and thermometers.

The Scientific Studies and Research Center (SSRC) – a Syrian government agency – is alleged to have paid North Korea for the equipment via a number of front companies.

The SSRC is promoted by the Syrian government as a civilian research institute but a Western intelligence agency told the BBC last year that chemical weapons were being manufactured at three SSRC sites – Masyaf, in Hama province, and at Dummar and Barzeh, both just outside Damascus.

The Syrian government told the UN panel that the only North Koreans present in Syria were sports coaches and athletes.

Among the alleged shipments from North Korea to Syria, at least five were sent via a Chinese trading firm, Cheng Tong Trading Co Ltd, the UN report says.

The shipments allegedly contained acid-resistant tiles – which can be used for activities conducted at high temperatures – of a quantity that would cover the area of a large scale industrial project.

While the seized items “do not appear on any control lists”, they included “materials that can be used to build bricks for the interior walls of [a] chemical factory”, the report noted.

China responded to the UN panel’s findings, saying it had no “evidence demonstrating the Cheng Tong Trading Co has business with” any North Korean entities in violation of UN Security Council resolutions.

UN spokesman Stéphane Dujarric did not say whether the leaked report would be published, but told the New York Times: “I think the overarching message is that all member states have a duty and responsibility to abide by the sanctions that are in place.”

What is Syria’s official position on chemical weapons?

Syria signed up to the Chemical Weapons Convention and agreed to have its declared chemical weapons stock destroyed in 2013 after a Sarin nerve agent attack killed hundreds of people in rebel-held suburbs of Damascus.

It has been accused of repeatedly using banned chemical weapons in the civil war since then.

The Organisation for the Prohibition of Chemical Weapons (OPCW) concluded that Sarin was used in Khan Sheikhoun, a rebel-held town in Idlib province, last April in an incident that killed more than 80 people. OPCW and UN investigators are confident the Syrian air force was to blame.

Suspected chlorine attacks have been recently reported in Syria, including on Sunday in the Eastern Ghouta.