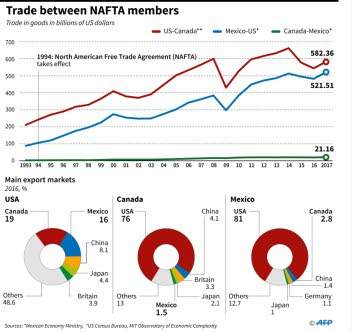 The collapse of the North American Free Trade Agreement (NAFTA) would cut at least 0.4 per cent from Canada’s economic growth, the International Monetary Fund (IMF) said yesterday, after negotiations to revamp the 1994 pact bogged down.

“Failure to reach an agreement within a reasonable timeframe could impact investment and growth for an extended period,” the IMF said in its annual review.

“In the event negotiations fail and there is a reversion to tariff rates that satisfy WTO (World Trade Organization) rules, long-run Canadian real GDP (gross domestic product) could be reduced by 0.4 per cent relative to the baseline forecast, and by even more if non-tariff trade costs increase,” the financing agency said.

Canada, Mexico, and the United States have held several rounds of talks over the past nine months to try to come up with a new NAFTA deal to satisfy President Donald Trump’s demands for better terms for the US, including a larger share of North American auto manufacturing.

The Canadian economy, said the IMF, has been “robust” and its hot housing market, which concerned economists, “is finally showing signs of cooling down” in response to new, tighter mortgage lending rules and other measures.

“However, economic anxiety is high due to trade tensions, uncertainty about the outcome of NAFTA negotiations and the impact of US tax cuts… on Canada’s medium-term competitiveness,” it added.

Exports and business investment also continue to lag, it warned in a statement.

Over the medium term, the IMF said “weak external competitiveness, sluggish labour productivity growth, and population ageing” would limit growth to about 1.75 per cent, or “significantly lower than its historical average”.