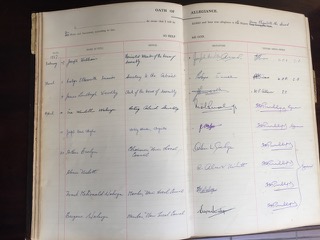 Fifty years ago on the St. Kitts, Nevis and Anguilla embarked on a new milestone in their constitutional development.  The 1967 constitution gave the new state internal self-government exercised through a Cabinet that was responsible for the actions of individual ministers.

Westminster  retained responsibility for external affairs and defence. The Governor had constitutional powers only. Sir Fred Phillips, though not a Kittitian was a highly respected West Indian.  He was the first person of Afro-Caribbean descent to hold the post.

Cabinet consisted of Premier Bradshaw, Deputy Premier Southwell, Ministers France, Glasford and Williams. Other members of the House of Assembly were Eugene Walwyn, Peter Adams, Fitzroy Bryant, Fred Parris, and Joseph Williams was a nominated member. Milton Allen was Speaker of the House and Icen Wharton was Deputy Speaker.

The item we are sharing today consists of the two pages showing their signatures to the oath of allegiance. Even the People’s Action Movement, which opposed the government, had to admit that, to that point in time, Statehood “was perhaps the greatest moment in our history”.

The change of constitution was froth with controversy especially as Anguilla and Nevis wanted their own form of internal self government. They had their ideas as to how it should be constituted, which sometimes differed from those of the Administration in Basseterre.

Meetings on the subject did not always resolve matters. Anguilla opted out of Statehood feeling that  Basseterre had not treated it fairly in the past.  The cause for local government was also taken up by the members of PAM. They were also vociferous about freedom of expression, which they felt was being stifled by the need to seek permission of the Chief of Police for the holding of public meetings.

Having just witnessed the dissolution of the West Indies Federation, and firmly believing that there was strength in numbers, Bradshaw was reluctant to see further disintegration of the new State.  He also saw this as an internal “family” matter.

Anguilla appealed to Britain who intervened blurring  the definition of internal matters and attempting to calm a wary USA.  That country had become a superpower and having conveniently forgotten its own anti-colonial conflicts, saw the islands’ struggle for self-determination as an eruption of little Cuba’s and was anxious that Britain should control its former colonies.

The original Oath Book containing the signatures and other original material on Statehood will be on display at the National Museum till mid-March.  We hope you find time to visit.