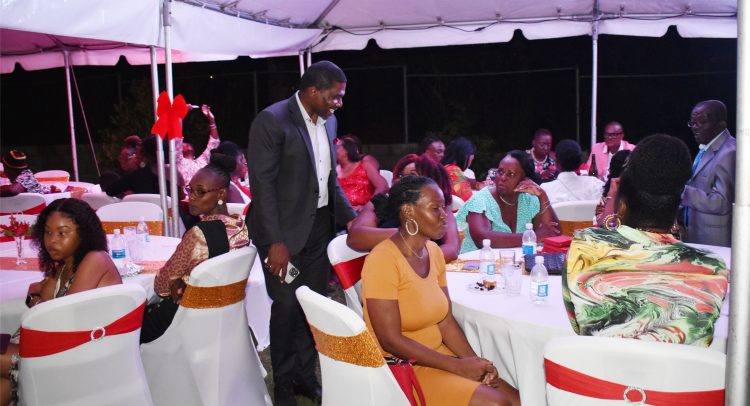 Natta-Nelson is fighting for you, PM Dr Drew assures constituents of Number Seven

St. Christopher Seven is one of the only two constituencies on St. Kitts not held by the governing St. Kitts Nevis Labour Party, but its constituents have been assured that their interests at the government level are honourably being advocated by the constituency’s party caretaker Ambassador His Excellency Leon Natta-Nelson.

The assurance was made on Saturday December 3 by Prime Minister of the Federation of St. Kitts and Nevis, the Hon Dr Terrance Drew, at His Excellency Ambassador Leon Natta-Nelson and St. Kitts Nevis Labour Party Branch Number Seven Workers’ Appreciation Dinner 2022, which was held at the Lodge/Ottley’s Community Centre in Ottley’s.

“I am sure that his presence will make sure that you the people of Constituency Number Seven are well represented and you benefit as well from the programmes of your caring government,” said Dr Drew who had to overcome effects of jetlag to attend the function just hours after he landed in St. Kitts after a fourteen-hour flight. He had been on official duties to Dubai in the Middle East.

His Excellency Leon Natta-Nelson first represented the St. Kitts Nevis Labour Party as the candidate for Constituency Number Seven in 2020. According to the Prime Minister, when he joined the team for the 2022 elections he demonstrated exactly the type of candidate that the St. Kitts Nevis Labour Party was looking for. Mr Natta-Nelson is a candidate who demonstrated that he was willing to work even when the odds were stacked against him.

“Even when the constituency seemed almost impossible, Leon put himself forward and said that he could do it,” said Dr Drew. “And I think when you look at the results from the last elections against a sitting prime minister, with all the resources that he could have mustered, Leon still made a significant dent in the results. And that kind of result could not have been had, had it not been for you the good people of Constituency Number Seven.”

Mr Leon Natta-Nelson received 903 votes, losing to the then sitting prime minister by a mere 363 votes. The third candidate, on a PAM ticket received 176 votes. Prime Minister Drew gave his own example where he made his first attempt at the Constituency Number Eight seat in 2015. He tried again in 2020, but it was in 2022 when he polled the highest number of votes in the election, receiving 2,950, and winning in all the boxes.

In his closing remarks, the Hon Dr Drew said: “I want to encourage you to continue to work hard. You have a government that is working with you to deliver for the people, and therefore for you the people of this constituency I charge you tonight and give you the order to continue to work hard. Put yourselves out there, work with your government and work with His Excellency, your candidate, Leon Natta-Nelson.”