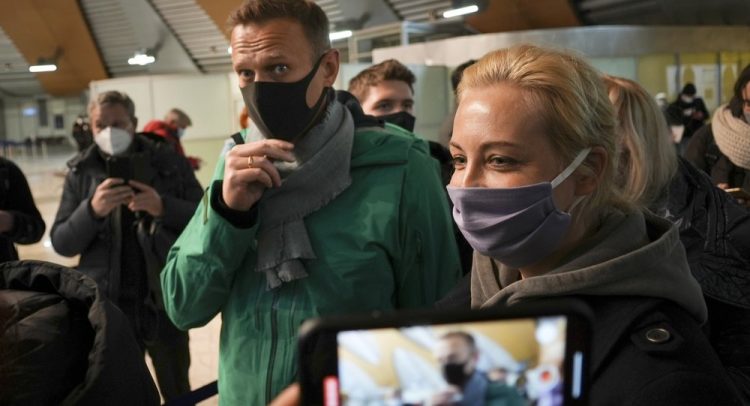 Navalny’s arrest adds to tension between Russia and the West

MOSCOW (AP) — Russian opposition leader Alexei Navalny’s arrest as he arrived in Moscow after recovering from his poisoning with a nerve agent drew criticism from Western nations and calls for his release, with Germany’s foreign minister on Monday calling it “incomprehensible.”

Navalny was detained at passport control at Moscow’s Sheremetyevo airport after flying in Sunday evening from Berlin, where he was treated following the poisoning in August that he blames on the Kremlin.

Navalny’s arrest adds another layer of tension to relations between Moscow and the West that have long been strained and were worsened by his poisoning.

German Foreign Minister Heiko Maas noted that Navalny had returned of his own volition and said “it is completely incomprehensible that he was detained by Russian authorities immediately after his arrival.”

“Russia is bound by its own constitution and by international commitments to the principle of the rule of law and the protection of civil rights,” Maas added. “These principles must of course also be applied to Alexei Navalny. He should be released immediately.”

The politician’s allies said Monday he was being held at a police precinct outside Moscow and has been refused access to his lawyer. According to Navalny’s lawyers, in an unexpected turn of events, a court hearing into whether Navalny should remain in custody started on Monday at the precinct itself, and they were notified minutes before.

“It is impossible what is happening over here,” Navalny said in video from the improvised court room, posted on his page in the messaging app Telegram. “It is lawlessness of the highest degree.”

U.S. President-elect Joe Biden’s pick for national security adviser called on Russian authorities to free Navalny. “Mr. Navalny should be immediately released, and the perpetrators of the outrageous attack on his life must be held accountable,” Jake Sullivan tweeted.

Navalny’s detention was widely expected because Russia’s prisons service said he had violated probation terms from a suspended sentence on a 2014 money-laundering conviction.

The prisons service said it would seek to have Navalny serve his 3½-year sentence behind bars.

Russian Foreign Minister Sergey Lavrov said Monday the stream of reactions to Navalny’s arrest by Western officials reflects an attempt “to divert attention from the crisis of the Western model of development.”

“Navalny’s case has received a foreign policy dimension artificially and without any foundation,” Lavrov said, arguing that his detention was a prerogative of Russian law enforcement agencies that explained their action. “It’s a matter of observing the law,” he added.

Navalny, 44, President Vladimir Putin’s most prominent and determined foe, brushed off concerns about arrest as he boarded his flight in Berlin on Sunday.

Navalny fell into a coma while aboard a domestic flight from Siberia to Moscow on Aug. 20. He was transferred from a hospital in Siberia to a Berlin hospital two days later.

Russian authorities insisted that the doctors who treated Navalny in Siberia before he was airlifted to Germany found no traces of poison. Russia refused to open a full-fledged criminal inquiry, citing a lack of evidence that Navalny was poisoned, and officials have challenged Germany to provide proof of the poisoning

Last month, Navalny released the recording of a phone call he said he made to a man he alleged was a member of a group of officers of the Federal Security Service, or FSB, who purportedly poisoned him in August and then tried to cover it up. The FSB dismissed the recording as fake.

Navalny has been a thorn in the Kremlin’s side for a decade, unusually durable in an opposition movement often demoralized by repression. Russian authorities have launched multiple criminal investigations against him, and he has been tried and convicted in two separate criminal cases widely seen as politically motivated.

In December 2014, Navalny was convicted on charges of fraud and money-laundering and received a 3½-year suspended sentence, which he denounced as politically motivated and the European Court of Human Rights found “arbitrary and manifestly unreasonable” three years later.

The sentence carried a probation period that was due to expire in December 2020. Authorities said the politician was subject to regular in-person checks with law enforcement officers as one of the conditions of his probation.

Russia’s prison service first accused Navalny of not appearing for these checks on Dec. 28 — two days before the probation period was supposed to end.

Navalny and his team rejected the accusations and said the move was an attempt by the Kremlin to keep the politician from coming back to Russia.

Three days before his return to Moscow, the prison service alleged in a statement that Navalny repeatedly failed to appear for the checks, including when he was convalescing in Germany, and said it was “obligated to undertake actions to detain” the politician.

Navalny had repeatedly said he would come back to Russia despite threats of arrest, saying he didn’t leave the country by choice, but rather “ended up in Germany in an intensive care box,” and said he was still dedicated to his cause.

“I will go back to Russia, I will continue my work. No other possibility has ever been considered or is being considered,” Navalny said in October.

Main Photo: Alexei Navalny and his wife Yuliastand in line at the passport control after arriving at Sheremetyevo airport, outside Moscow, Russia, Sunday, Jan. 17, 2021. Russia’s prison service says opposition leader Alexei Navalny has been detained at a Moscow airport after returning from Germany. (AP Photo/Mstyslav Chernov)