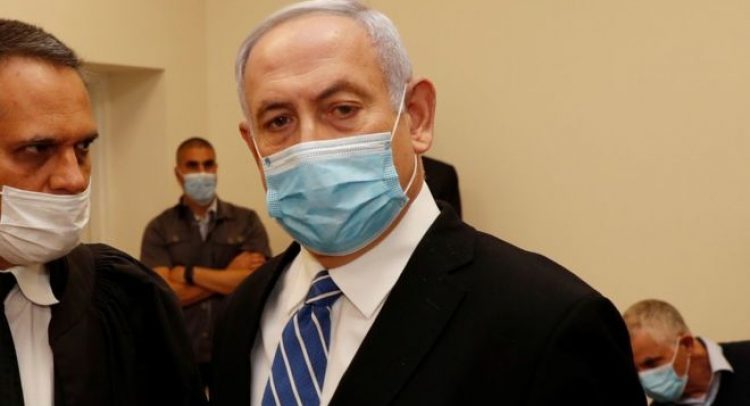 The trial of Israeli Prime Minister Benjamin Netanyahu on corruption charges has opened in Jerusalem, days after he began a new term in office.

Mr Netanyahu, 70, is the first standing leader to face trial in the country’s history. He denies accusations of bribery, fraud and breach of trust.

Arrived at the courthouse for a brief hearing, he said the cases were aimed at “toppling him in any way possible”.

He was sworn back into office as head of a rare unity government a week ago.

He has rejected calls by opponents to step down while he fights the cases.

The leader of the right-wing Likud party is Israel’s longest-serving prime minister, having been in power continuously since 2009. He also served a term in office from 1996-1999.

What happened at the court?

As he arrived at the Jerusalem District Court on Sunday, he told reporters: “I’m here with a straight back and my head held high.”

“When you need to take me down, a strong prime minister from the right, everything is possible,” he added.

At the start of the hearing, which lasted about an hour, Mr Netanyahu told the judges: “I read and I understand the indictment.”

He stood in a face mask and refused to sit down on the defendants’ bench until the reporters left the room, local media say.

His lawyers say they need several months to prepare their defence. The date for the next hearing has been set for 19 July.

What is Benjamin Netanyahu accused of?

Mr Netanyahu has strongly denied all the charges against him, branding them a “witch-hunt” by political opponents, and has vowed to clear his name.

How can the prime minister serve and stand trial at the same time?

According to Israeli law, a leader charged with a crime is not required to resign. But there is no precedent.

A former prime minister, Ehud Olmert, stepped down as party leader when he was under investigation for corruption in 2008 but technically remained prime minister until elections the following year – polls which brought Benjamin Netanyahu to power.

Under the power-sharing deal with Benny Gantz, a new role of “alternate prime minister” was created, which means when the two men switch positions in 18 months’ time, Mr Netanyahu will still occupy a prime ministerial office and stay on as Mr Gantz’s deputy.

What does the trial mean for the country?
In short, a serving prime minister occupying the most powerful office in the land simultaneously trying to clear his name and avoid jail-time.

Opposition leader Yair Lapid called it “an embarrassment” and “horrible for the spirit of the nation” though it is not expected to affect government policy. Mr Netanyahu is still likely to press ahead with plans to annex Jewish settlements and the Jordan Valley – territory in the occupied West Bank – in the coming months, a move certain to infuriate the Palestinians.

Opinion in Israel as to whether he should carry on as prime minister is split: critics say the spectacle of a trial makes Mr Netanyahu’s job untenable, but his supporters – including his party – say he has been democratically elected and should not be forced out.

Even if he is convicted, Mr Netanyahu will not be required to resign unless and until any appeals are exhausted – which could, in theory, be many months or years into the future.

In Ehud Olmert’s case, the former prime minister went on trial in 2009 and after he was convicted only began serving his sentence in 2016 due to the long legal process.