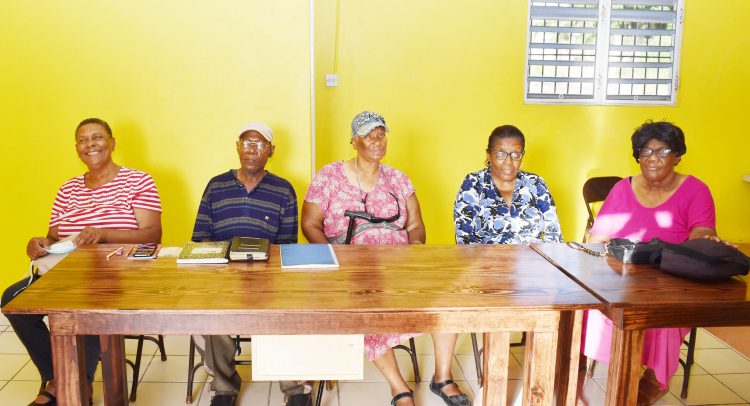 CHARLESTOWN, NEVIS, May 20, 2022 (MMS-SKN) — One of Nevis’ long-serving community/welfare group, the Nevis Blind Light and Visually Impaired Society, will be hosting a luncheon on Wednesday May 25 to raise funds to support three scholarship holders.

“We have been giving scholarships for a few years now,” explained President of the Society, Ms Jenipha Freeman. “Currently we have three scholarship holders, two girls and a boy. The boy is in secondary school in Gingerland, one of the girls is at the Nevis International Secondary School in Brown Pasture, and the other girl is in the final year at the Violet O. Jeffers Nicholas (VOJN) Primary School in Combermere.”

Ms Freeman made the remarks on Wednesday May 18 when she, Committee Member Mrs Jacqueline Claxton, and members Mr Synrick Morton, Ms Scicely Daniel, and Mrs Lorene Freeman, met at the School for the Blind in Ramsbury to make final arrangements for the luncheon which will be held at the same venue.

Member of the Nevis Blind Light and Visually Impaired Society, Mrs Wilma Ward, had come earlier and assisted with the cleaning of chicken that will be cooked for the luncheon, as she had to leave for a meeting elsewhere.

According to President Ms Freeman, the society holds two fundraising luncheons annually, one in May and the other in November. She pointed out that this luncheon is important to them as they need to raise enough money to make up for the shortfall arising out of the fact that for two years they have not held their fundraising concert which is usually held in February as a result of the Covid-19 pandemic.

“The children that have been selected are children with visual problems,” observed Ms Freeman. “The child at VOJN, she is not as bad as the girl at the private high school, but she is doing well. The chap who is at the Gingerland Secondary School is doing well at school too, as he is only blind in one eye.”

Tickets, which are selling at $25, are on sale from members of the society and they are encouraging members of the public to support them in this noble gesture.

Ms Freeman who has been the President of the association since 1997 pointed out that the scholarships cover the entire primary and high school education up to Sixth Form once they are performing well in school.

“We give our students $750 annually, and we also would give them an envelope in December when we give to persons in the general public,” said Ms Freeman. “Although we are a society called Nevis Blind Light and Visually Impaired Society, we give to other persons with disabilities as well, because it could be a child in a wheelchair. We have other children that we give donations to, but that is usually at the end of the year in December. And we have adults also who we would help.”

Members of the society who pay an annual fee of $25 ensure that the society has enough funds to meet some of its financial obligations in supporting needy members and persons with other forms of disabilities in the society by paying a monthly contribution of ten dollars.

She explained that the next luncheon will be held hopefully in late October as it will give them more time to collect money as those funds will be used to give to the needy members of the general public in December for Christmas.

“We usually send out our Christmas envelopes, anything like the week before Christmas, so that by the time Christmas comes they would have received it maybe a week ago and they are able to buy what they want with it,” said Ms Freeman.