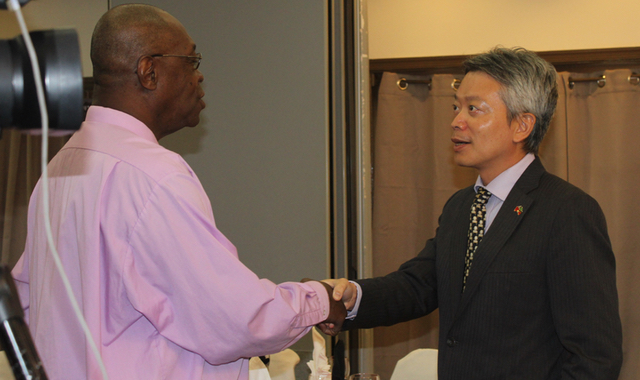 Basseterre, St. Kitts, 8th January, 2019 (MyVueNews.com) – The Embassy of the Republic of China (Taiwan), in collaboration with ZIZ Television, is introducing, on Thursday, 17th January, the first showing of The New World, a television series of drama and action.

The Embassy showed a trailer of The New World to Media personnel during a press luncheon held Tuesday, 8th January, 2019, at the Ocean Terrace Inn.

According to Resident Ambassador Tom Chih-Chiang Lee, the television series is a means of further sharing the culture of Taiwan with the people of the federation through and interesting and engaging action oriented TV show.

“I watched your carnival. I watched your J’ouvert, and I was able to understand some of your culture. That’s why we want to introduce our culture to our friends in St. Kitts and Nevis, so when they watch it, they will not only be inspired by the program, but they also can learn our culture,” Ambassador Lee said.

According to the ambassador, when the people of both countries get to know each other better it can build a better foundation for deepening the relationship between the two countries.

“We are getting ready to start a new series called The New World, which is a series that focuses on various aspects of life in Taiwan. They have organised this press luncheon to promote the idea of the program,” said Galloway.

Galloway said, This time it has been formalised. It is something that we want to continue with the Republic of China (Taiwan).

It is an action packed drama that is based on actual stories in Taiwan that they have produced and made into a television series. Other photos by MyVueNews.com

No- and Low-Calorie Sweeteners May Not Help With Weight Loss