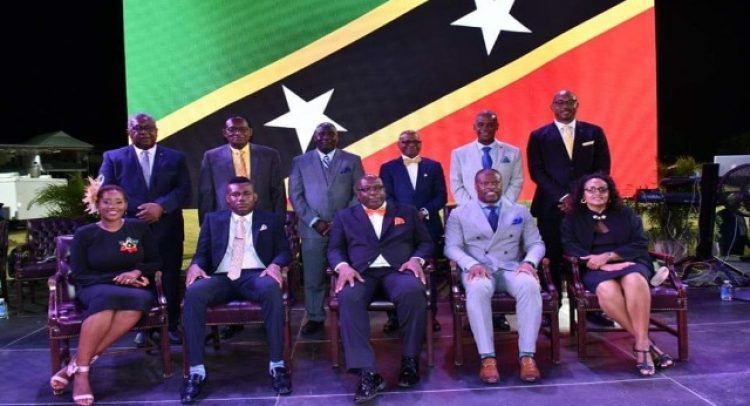 Basseterre, 15th June, 2020 (MyVue News.com)- Ten (10) days after the General Election, the people of St. Kitts & Nevis now have a full government in place, following Sunday’s Official Swearing-in of the Cabinet of Ministers, during a 3 hour ceremony hosted at the Warner Park Cricket Stadium, in Basseterre.

There were no major surprises in the allocation of portfolios that were revealed by the Prime Minister, Dr. Timothy Harris.

However, there were changes that had to be made due to the increased number of ministers and the retirement of one former Cabinet member and the loss at the polls, of another.

There was some anticipation though, surrounding the portfolios to be allocated to  newcomers, Jonel Powell, Akilah Byron-Nisbett, Alexis Jeffers and Eric Evelyn.

Deputy Prime Minister, Shawn Richards, who is also the Political Leader of PAM, with the largest single block of parliamentarians, has been given new duties and will now assume mainly those ministries and departments previously under the management of Ian Patches Liburd, who was not successful in his bid for re-election.

Therefore, those portfolios once held by Richards, have been passed on to his Party Chairman, Jonel Powell, who will carry the mantle for Education, Youth, Sport & Culture.

Eric Evelyn, who replaces the retired Vance Amory, has assumed duties for the Environment and Cooperatives, while Alexis Jeffers will spearhead efforts for Agriculture, Fisheries, and Marine Resources.

The Cabinet was sworn in by Resident High Court Judge, Trevor Ward, QC, in the presence of Governor General, Sir Tapley Seaton, who gave legal effect to the appointments.

The full composition, as outlined by the Prime Minister, is as follows:

The ceremony was attended by ambassadors and Consular representatives of various foreign countries, senior government officials, leaders of business and civil society and thousands of supporters of the three party coalition, PAM, CCM, PLP, which is known as Team Unity.

A song for all seasons

Another police killing of a black man stokes US tension, debate