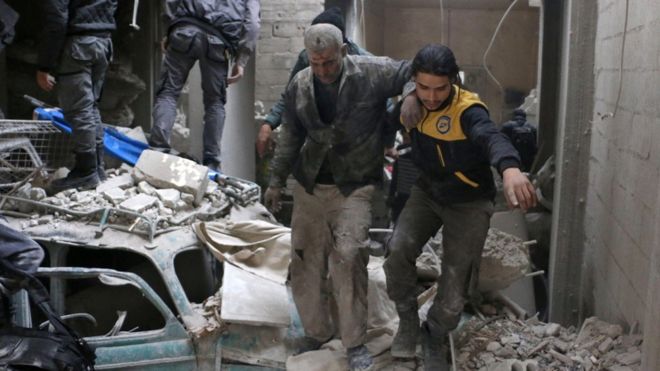 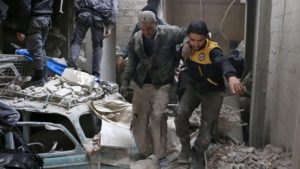 Syrian government forces are reported to have carried out a new wave of air and artillery strikes on the besieged rebel-held Eastern Ghouta region.

The attacks left at least 33 civilians dead, a monitoring group said, bringing to 382 the number killed since Sunday.

A draft resolution calling for a 30-day nationwide truce is to be discussed by the UN Security Council, but the Syrian government’s ally Russia may veto it.

Russian Foreign Minister Sergei Lavrov said it would consider allowing the text to pass if the truce does not cover the jihadist groups Islamic State and Hayat Tahrir al-Sham, an al-Qaeda-linked alliance that has a presence in the Eastern Ghouta.

Mr Lavrov said he also wanted to exclude rebel groups in the enclave who are “co-operating” with Hayat Tahrir al-Sham and shelling nearby government-held areas.

Separately, Iran’s Deputy Foreign Minister, Abbas Araghchi, has told the BBC “fear of war is everywhere in our region” and at the same time described the situation with Iran’s Syrian ally as “very complicated”.

The Syrian state news agency meanwhile reported that a child was killed and six civilians wounded in the government-controlled Barzeh district of Damascus by rebel shellfire. Army units responded with “precision strikes”, destroying a number of rebel positions and inflicting heavy losses, it said.

The Syrian Observatory says that between Sunday and Wednesday the Eastern Ghouta was hit by about 420 air strikes, 140 barrel bombs dropped by helicopters, and 1,520 rockets and 880 shells fired by ground forces, leaving more than 300 people dead.

The Union of Medical Care and Relief Organisations (UOSSM), which operates hospitals in the Eastern Ghouta, says more than 305 civilians were killed between Monday and Wednesday.

The government has denied targeting civilians and insisted it is trying to liberate the Eastern Ghouta from “terrorists” – a term it has used to describe both jihadist militants and the mainstream rebel groups that dominate the enclave.

But on Wednesday, UN human rights chief Zeid Raad Al Hussein accused it of carrying out a “monstrous campaign of annihilation”.

Already overwhelmed medical facilities had been repeatedly hit, meaning that hundreds of people with extremely severe injuries faced a slow and painful death without adequate medical care, he said.

Médecins Sans Frontières (MSF) said 13 of the hospitals and clinics it supported had been damaged or destroyed in strikes in the past three days, while the UOSSM said a total of 22 hospitals had been put out of service since Sunday.

MSF added that the government’s siege was also preventing medics from obtaining essential life-saving supplies, warning that its facilities had completely run out of supplies of blood bags, general anaesthetic drugs and intravenous antibiotics.