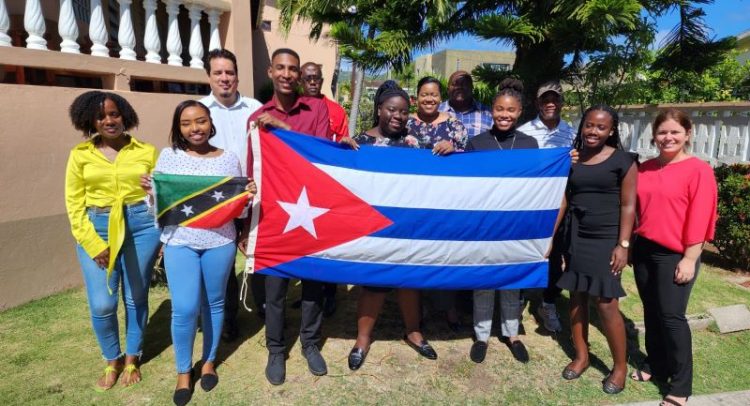 (Embassy of the Republic of Cuba):  We received at the Cuban Embassy in Saint Kitts and Nevis the eight young people who will benefit this year from the government cooperation program in education, which the Greater Antilles offers to CARICOM countries and many others from the rest of the world.

After reading and signing the code of ethics that commits them to comply with the basic principles of behavior in their student and professional activity, the new scholarship holders completed their registration form as the last step in the process of admission to this program, with which each year 10 full scholarships are awarded to this Federation, a number that will increase from then on, as a result of the agreements of the last Cuba-CARICOM Summit.

On this occasion, five of them will study Medicine, two opted for specialties in this subject, and a young woman will study a pedagogical career in Physical Education. Each one, after several years of professional training, will return to contribute with their services and knowledge to the social development of their country.

Ambassador David Rivero, during the exchange with the scholarship holders, offered a general overview of the current situation in Cuba, as well as the characteristics and benefits of its educational system. In addition, he urged them to study and make the most of this opportunity that they have today.

Hollis Prentice, president of the Cuban Alumni Association, who was also present at the meeting, told them about his experiences in Cienfuegos, the city where he completed his university studies. Likewise, he expressed the importance and value of this program and called on them to love Cuba from the beginning and ignore the disinformation campaigns that are targeted against it.

Thanks to the humanist policy of the Revolution, based on international collaboration, since the first years of the Revolution, thousands of professionals from all over the world have been trained in Cuban classrooms; materializing the dream of Commander in Chief Fidel Castro, of contributing to the social development of the peoples of Africa, Asia, Latin America and the Caribbean, through the preparation of their human resources.

Gaston Browne & ABLP back in control of Antigua-Barbuda