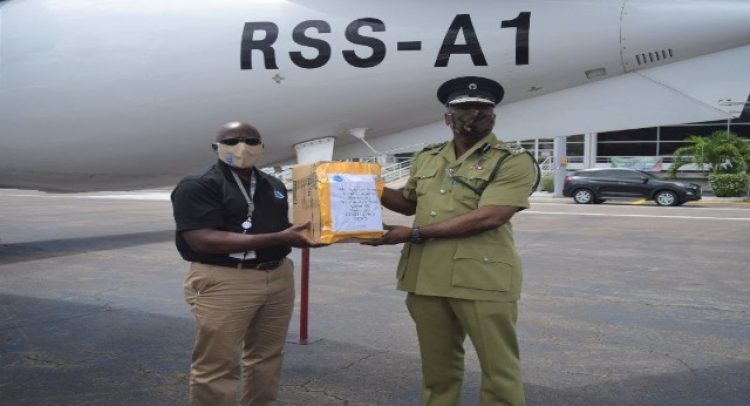 New measures in place for safety of prison staff and inmates

Her Majesty’s Prison is now equipped with much needed sanitation supplies and personal protective equipment to further ensure the safety of staff and residents. St. Kitts and Nevis were among 12 territories in the region to receive the supplies through a donation from the Implementation Agency for Crime and Security (IMPACS).

The donation was airlifted to the Federation on May 27, by the Regional Security Service (RSS) and included one box of KN95 and surgical masks, seven boxes of gloves, two boxes of hazmat suits, five bottles of bleach, 10 buckets of hand sanitizer, 10 boxes of disinfectant, 25 boxes of soap and 25 face shields with an additional 25 to be sent at a later date. The donations were made possible by a grant from the British High Commission in Trinidad and Tobago.

Commissioner of Corrections, Terrance James, thanked IMPACS for their timely donation of these much-needed supplies.

“On behalf of the government and people of the Federation, staff and inmates at Her Majesty’s Prison, I want to say thank you to IMPACS for coordinating this whole drive of delivering these equipment to the various countries around the region to assist them in fighting the COVID-19,” said Commission James.

He also disclosed that the request for these supplies was made through a Head of Prisons and Commissioner of Corrections video conference held on March 25, where the representatives discussed the possible effects of the pandemic on the correctional facility systems in the region.

Acting Executive Director of Caricom IMPACS, Lieutenant Colonel Michael Jones, thanked the RSS and the British High Commission for their assistance in procuring and delivering the supplies.

“Essentially, as you will see, the motto of the COVID pandemic is that ‘We are all in this together’ and so we sought some assistance from the British High Commission in Trinidad which gave us a grant funding that we can make these contributions, not only to St. Kitts, but [to] 12 members within Caricom throughout the region. So, on their behalf, it was a pleasure to work along with RSS to make this delivery here in St. Kitts,” he said.

The St. Kitts and Nevis Economy – A Record Of Outstanding Achievements

US heads into a new week shaken by violence and frustration