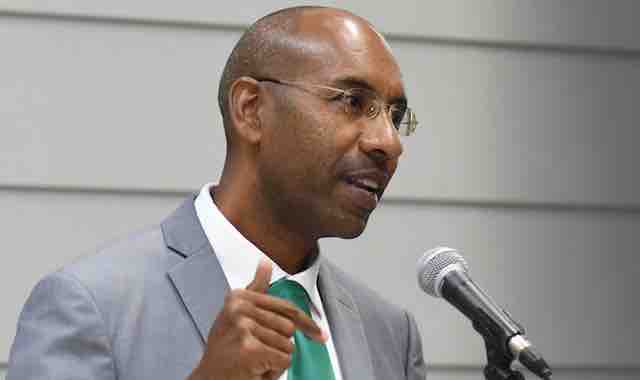 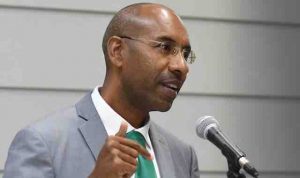 The near two-year-old Solutions Barbados, which focuses on the improvement of governance and business development in Barbados, is promising a workable solution to the island’s debt of 145.9 per cent of gross domestic product (GDP) as at the end of December last year.

Political leader Grenville Phillips II said under his party’s plan Government debt would be eliminated within a year.

Speaking at a University of the West Indies (UWI) Cave Hill Campus panel discussion hosted by the Political Science Students’ Association last night, he said if given the chance to lead the country, Solutions Barbados would implement a four-step plan.

“Our plan is workable. Firstly, reduce taxes. Whenever we reduce taxes we take in more revenue in Barbados, it is proven. Secondly, manage all public service properly in accordance to the ISO 9001 quality project management system. Everyone agrees that are public services are poorly managed, the days of the long lines can be over,” he said.

“Additionally, address corruption. We have been overpaying for goods and services because of corruption . . . .And, finally, our plan is to depoliticize our civil service, so that persons are promoted on merit alone, nothing else, not on who you know.”

Phillips said he was so confident of success, a Solutions Barbados administration would resign if the plan failed to put the country’s economy back on track and eliminate its debt.

He outlined his party’s proposals as he lamented that the country’s debt-to-GDP ratio was a long way off the 40 per cent recommended by the International Monytary Fund (IMF).

And he blamed for the major political parties which have governed Barbados since independence, for the state of affairs.

“The Democratic Labour Party believes that we finance our development; the building of our roads, airports and these things by taxing people. The Barbados Labour Party believes that we finance the development of our country by going into debt. Debt financing, you borrow money and then use that money to build,” Phillips said while recounting the country’s debt history.

“Errol Barrow [the first Prime Minister] got the country and it was debt free and after his ten years we were $259 billion in debt. Tom Adams came along with the Barbados Labour Party and after his ten years $3.1 billion in debt. However, we had an airport and good infrastructure. The DLP came back and Erskine Sandiford struggled with the high debt and we were left with $4.3 billion in debt, so the Barbados Labour Party took over but they took the debt to $9 billion . . . .The current DLP led administration has now taken it to $14 billion,” he charged.

Phillips contended that corruption was thriving here, blaming a lack of accountability.

“You have never been able to hold a Barbados Labour Party or a Democratic Labour Party administration accountable ever, not in Barbados. Every few years, each side accuses the other of gross corruption, every five years the evidence comes out and we are told it is incontrovertible evidence but when the party gets in all the evidence goes away,” he said.

Phillips said the country was on the brink of economic ruin, the accountability method of ‘trust us or believe us’, which has been used for over 50 years was no longer acceptable.

Central Bank Governor Cleviston Haynes recently announced that the island’s foreign exchange reserves had slumped to just 6.6 weeks of import cover, or $410 million at the end of December last year, and he urged the Freundel Stuart administration to “continue to build on the gains it has made on reducing the fiscal imbalance” for fiscal year 2018/2019, arguing that “further consolidation, particularly through structural expenditure reforms and improved tax administration, was now required.

“Effective implementation of these measures would help to prevent further accumulation of arrears which will aid in restoring confidence and facilitating private sector activity,” Haynes advised.

In addition, the IMF has warned that the economy would slow to a jaundiced 0.5 per cent growth this year, and has emphasized the need for a comprehensive restructuring of state owned enterprises, saying this was critical in order to address structural imbalance in the public sector, “in particular by reducing Government transfers”.