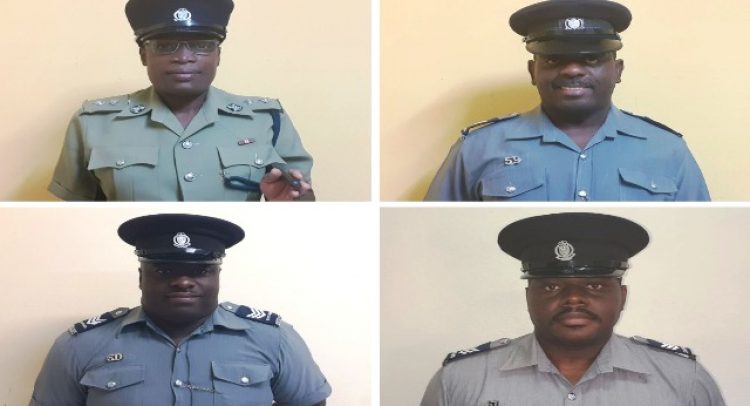 Basseterre, 30th March, 2021 (MyVue News.com)–Police Commissioner Hilroy Brandy has implored some of his newly promoted officers to “tighten up in the areas where they were currently having challenges, now that they have assumed higher ranks and more responsibilities, within the police force.

The Commissioner also urged them to continue working hard and to set their sights on being promoted to the next rank.

Those receiving promotions were Joel Caines and Shorna Edwards, who have now moved up to the rank of Inspector, retroactive from 1st December, 2018.

In addition, Marvin Thompson, Valon Hodge, Kishorn Charles and Travis Henry have been elevated to the rank of Sargeant, backdated to 1st October, 2018.

A special brief ceremony was recently hosted at Police Headquarters, and members of the Executive Command congratulated the Officers and offered words of advice and motivation.

Assistant Commissioner of Police (ACP), Andre Mitchell, stressed to the Officers that knowledge is power and encouraged them to pursue academic excellence throughout their careers. “Continue to move forward,” ACP Mitchell said.

“Be transparent, be consistent and be trustworthy. Be confident in your dealings…Lead by example,” ACP Adolph Adams told the newly confirmed Officers.

“You are the new leaders in an organization that needs more good leaders,” Cumberbatch said.

Govia added, “We are not looking for bosses, we are looking for leaders. We know of your potential, but potential alone is not enough, it is time to demonstrate.”

Coach Leo: Victory Against The Bahamas An ‘Amazing Result’

Witness in George Floyd case: ‘I witnessed a murder’