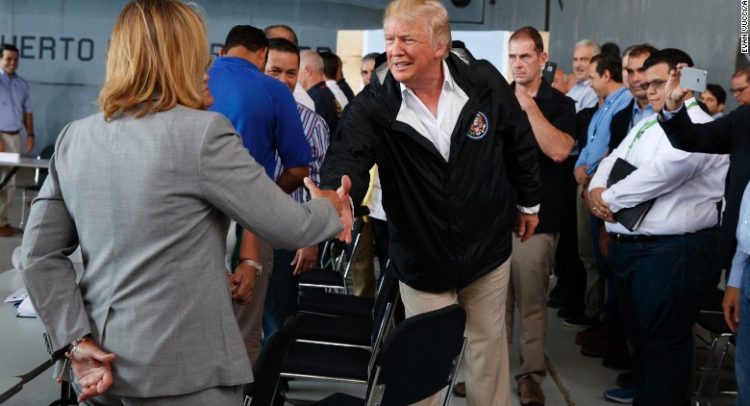 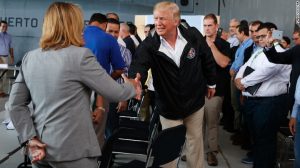 Less than two weeks after Hurricane Maria devastated Puerto Rico, President Donald Trump took to the island to praise the federal officials in charge of the recovery efforts and declare they could be “proud” that the death toll had climbed to just 16 people.

“Every death is a horror — but if you look at a real catastrophe, like Katrina, and you look at the tremendous hundreds and hundreds and hundreds of people that died, and you look at what happened here with, really, a storm that was just totally overpowering — nobody has ever seen anything like this,” Trump said then. “Everybody around this table and everybody watching can really be very proud of what’s taken place in Puerto Rico.”
Two weeks later, he gave his administration a 10 out of 10 for its response in Puerto Rico.
Even then, Trump’s comments struck many as tone deaf. The US territory’s 3.5 million residents still lacked access to potable water and nearly all the island lacked electricity. Local officials and others on the ground were already sounding the alarm and critics were calling attention to an all-too-slow pace of the recovery efforts.
Trump contrasts Puerto Rico death toll to &#39;a real catastrophe like Katrina&#39;

But now, the government of Puerto Rico is revising the 64-person death toll it declared in December, estimating that more than 1,400 people died as a result of the devastating hurricane — or 400 short of Hurricane Katrina’s death toll — raising questions about the effectiveness of the federal response to the hurricane and its aftermath.
White House deputy press secretary Hogan Gidley said Thursday the Trump administration is continuing to aid Puerto Rico.
“There’s only one official count and the actual counting of disaster related fatalities is the local responsibility of Puerto Rico. We have been supportive of Governor (Ricardo) Rossello’s efforts to ensure a full accounting and transparency. Those grieving deserve no less,” he said in a statement to CNN. “The whole of government remains focused on ongoing recovery and preparedness for the current hurricane season.”
The new estimate it follows several other studies in recent months estimating the death toll surging well past 64 to anywhere from 1,000 to more than 4,000.
Even as those studies emerged and Puerto Rico continued to struggle to restore power to the entire island, Trump offered no indication the federal response needed to be re-evaluated or examined.
Instead, during a visit to the Federal Emergency Management Agency (FEMA) headquarters in June, Trump continued to lavish praise on federal officials. He declared himself “very proud” of federal officials work to beat back last year’s devastating hurricane season and said “our entire government leapt into action to coordinate the response along with state and local leaders.”
“We really appreciate the job you’ve done,” Trump told FEMA officials and members of his Cabinet. “I want to thank you very much.”

FEMA admitted in a July report that it was understaffed and underprepared for last year’s hurricane season. In Puerto Rico in particular, the agency admitted it did not have enough supplies on hand when Maria hit the island.
The agency also said in a 65-page report that “FEMA leadership acknowledged that the Agency could have better anticipated that the severity of hurricanes Irma and Maria would cause long-term, significant damage to the territories’ infrastructure.

“The latest death toll estimate from Puerto Rico’s government and Trump’s repeated rosy assessments of the recovery efforts in Puerto Rico evoked comparisons to President George W. Bush’s praise for his FEMA Director Michael Brown during his first visit to the region affected by Hurricane Katrina in 2005.
“Brownie, you’re doing a heck of a job,” Bush said during a visit that came just four days after Katrina made landfall in Louisiana, when — just like Trump’s remarks — it was still unclear how high the death toll would rise.
Trump not only repeatedly praised the federal response, but he also struck out at the news media and critics who highlighted the slow pace of some of the recovery efforts and the dire conditions that much of the island continued to face for weeks and months after the hurricane made landfall.
Ten days after the hurricane made landfall, Trump lambasted news reports about the troubled situation in Puerto Rico in a series of tweets.
“Despite the Fake News Media in conjunction with the Dems, an amazing job is being done in Puerto Rico,” Trump tweeted. “The Fake News Networks are working overtime in Puerto Rico doing their best to take the spirit away from our soldiers and first R’s. Shame!”

In another tweet, he lashed out at San Juan’s mayor who took to the airwaves to raise alarm about the slow pace of recovery efforts.
“Such poor leadership ability by the Mayor of San Juan, and others in Puerto Rico, who are not able to get their workers to help,” he tweeted.