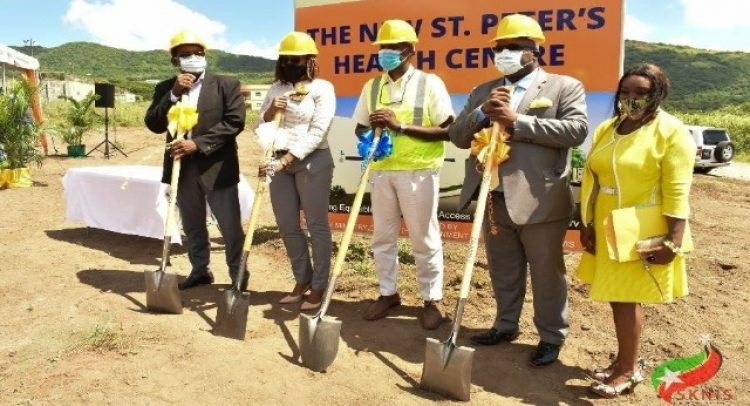 Basseterre, 15th September, 2020, (MyVue News.com) – Almost 4 Million Dollars is being spent on a new medical facility that will be located in the Parish of St. Peter’s, St. Kitts.

Government officials have confirmed that a new health center is now being built and should be completed by August, 2021.

Parliamentary representative for the area, Eugene Hamilton, said that according to the 2011 census data, the Parish was the fastest growing community in the country and government is responding by providing additional social services to the residents.

This new facility will include a variety of rooms for sterilization, sexual reproductive counselling, triage, isolation, treatment, elderly care physical activity, examinations, treatment and a sickbay, said Director of the Public Works Department,Cromwell Williams, while speaking at a groundbreaking ceremony on Monday, 14th September,2020.

Additionally, there will be offices for staff such as an environmental health office, nurses’ office and nurses’ station, and two offices for doctors are also included as well as an ambulance port, reception and waiting area, play area, laundry room and a meeting room.

The Public Works Director revealed that the contract to build the health center has been awarded to Haynes and Associates, and that his department will ensure that the project is completed as scheduled.

Also involved and attending the ceremony was the Minister of Health, Akilah Byron-Nisbett, Prime Minister, Dr. Timothy Harris and Permanent Secretary in the Ministry of Health, Delores Stapleton-Harris.

Minister of Health, Byron-Nisbett, stated that the stronger and more resilient health care sector will focus on reducing the impact of both communicable and non-communicable diseases on the people of the Federation of St. Kitts and Nevis.

Minister Byron-Nisbett also noted that the construction of the new health centre illustrates the ministry’s commitment and significant buy in to the United Nations Sustainable Development Goal #3 Family Health, Good Health and Well-being.

The minister said that it is the ministry’s intention to continue to invest in health and wellness at the primary health care level.