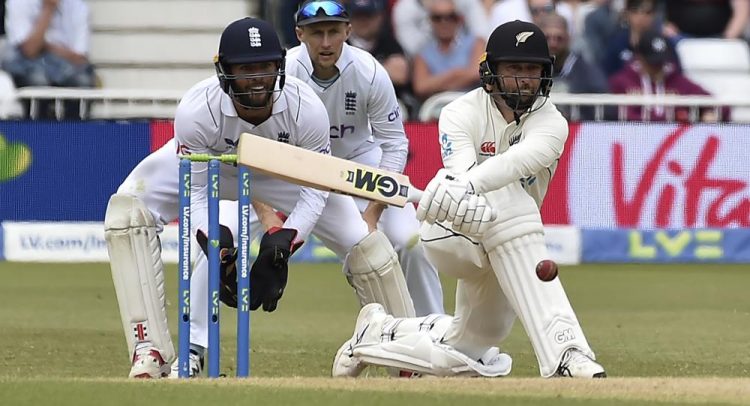 NOTTINGHAM, England (AP) — New Zealand extended its lead over England to 128 runs after moving to 114-2 by tea on Day 4 of the second test on Monday.

Having dismissed England for 539 before lunch to take a 14-run lead into the second innings, the New Zealanders are looking to push the hosts out of contention for a series-clinching victory at Trent Bridge.

Tom Latham (4) and Devon Conway (52) were the batsmen to lose their wickets, leaving Will Young (49 not out) and Henry Nicholls (3 not out) in the middle at the end of the second session.

Jimmy Anderson claimed the 650th wicket of his career when Latham left a delivery from round the wicket from the 39-year-old pacer that swung in and splattered the stumps.

A reverse sweep for four off spinner Jack Leach brought up Conway’s fourth half-century in his ninth test but he departed when choosing to play a traditional sweep. He top-edged it and Bairstow took a catch on the dive coming in from square leg.

Daryl Mitchell took a diving one-handed catch at slip to remove Stuart Broad (9) off the spin bowling of Michael Bracewell. Ben Foakes was then run out for 56 after a mix-up with new batter Matthew Potts, who turned back after initially calling for a quick single.

Boult (5-106) completed his five-fer by bowling Potts through the gate — half of his five-wicket hauls have come against England — and Anderson (9) was the last man out, stumped off Bracewell.

Playing his first test, Bracewell had figures of 3-62.

The onus is on New Zealand to win the match after losing the first test of the three-match series by five wickets at Lord’s.