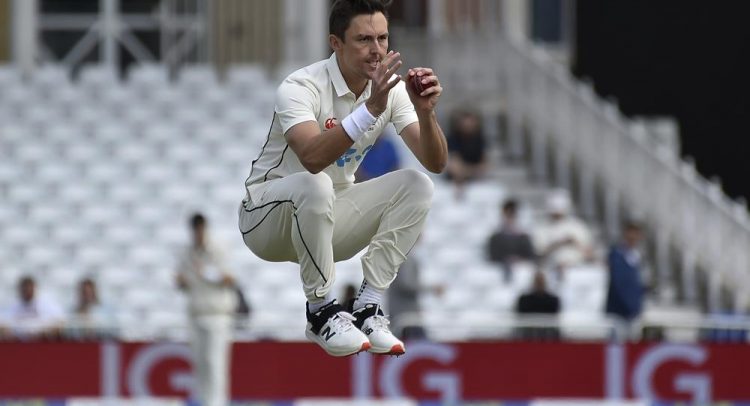 NOTTINGHAM, England (AP) — New Zealand will take a 14-run lead into the second innings of the second test against England on Monday after dismissing the hosts for 539 before lunch on Day 4, with left-arm pacer Trent Boult claiming his 10th five-wicket haul in test matches.

England resumed on 473-5 and Joe Root started aggressively, hitting a six from a reverse-scoop shot typically seen in white-ball cricket, before hammering Boult to Tom Southee at short extra cover for 176. Root added 13 runs to his overnight score.

Daryl Mitchell took a diving one-handed catch at slip to remove Stuart Broad (9) off the spin bowling of Michael Bracewell. Ben Foakes was then run out for 56 after a mix-up with new batter Matthew Potts, who turned back after initially calling for a quick single.

Boult (5-106) completed his five-fer by bowling Potts through the gate — half of his five-wicket hauls have come against England — and Jimmy Anderson (9) was the last man out, stumped off Michael Bracewell.

Playing his first test, Bracewell had figures of 3-62.

All results remain possible at Trent Bridge, which has been a batter’s paradise so far.

The onus is on New Zealand to win the match after losing the first test at Lord’s by five wickets.

New Zealand’s Trent Boult warms up before bowling a delivery during the fourth day of the second cricket test match between England and New Zealand at Trent Bridge in Nottingham, England, Monday, June 13, 2022. (AP Photo/Rui Vieira)