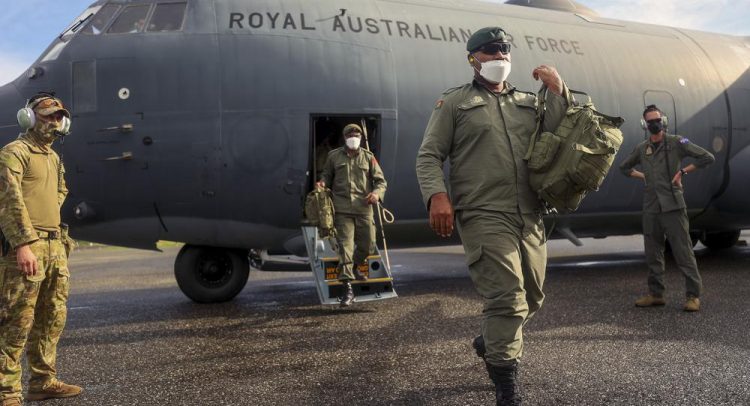 WELLINGTON, New Zealand (AP) — New Zealand will send up to 65 military and police personnel to the Solomon Islands in the coming days after rioting and looting broke out there last week over several issues, including concerns about the country’s increasing links with China.

Solomon Islands police found three bodies in a burned-out building and arrested more than 100 people amid the violence.

The latest deployment of foreign personnel comes ahead of a push by Solomon Islands opposition leader Matthew Wale to hold a no-confidence vote next week on Prime Minister Manasseh Sogavare.

“This is a short-term, immediate response and we will continue to monitor the situation,” said New Zealand’s Foreign Affairs Minister Nanaia Mahuta.

New Zealand plans to send 15 military personnel Thursday followed by up to 50 more military and police personnel over the weekend.

The unrest was sparked by underlying grievances between the two main islands in a rivalry that dates back decades. Part of the concern relates to the country’s increasing links with China. Sogavare has been widely criticized by leaders of the island of Malaita for a 2019 decision to drop diplomatic ties with Taiwan in favor of mainland China.

Sogavare’s government, meanwhile, has been upset over millions in U.S. aid promised directly to Malaita, rather than through the central government on the largest island of Guadalcanal, where Honiara is located.

Sogavare has blamed outside interference for stirring up the protests calling for his resignation, with a thinly veiled reference to Taiwan and the U.S.

Riots and looting targeting Honiara’s Chinatown and downtown precincts erupted Nov. 24 following a peaceful protest in the capital by people from Malaita. Police fired tear gas and rubber bullets at the demonstrators, who set fire to the National Parliament, a police station and many other buildings, including one of Sogavare’s homes.

Critics also blamed the unrest on complaints of a lack of government services and accountability, corruption and Chinese businesses giving jobs to foreigners instead of locals.

The Solomon Islands has a population of about 700,000 and is located northeast of Australia.

Fiji soldiers disembark from an Australian Air Force C130 in Honiara, Solomon Islands, Tuesday, Nov. 30, 2021. New Zealand announced Wednesday, Dec. 1, 2021, that they will send up to 65 military and police personnel to the Solomon Islands over the coming days after rioting and looting broke out there last week.(Gary Ramage via AP)

Buttler open to another day-night Ashes test, or any cricket