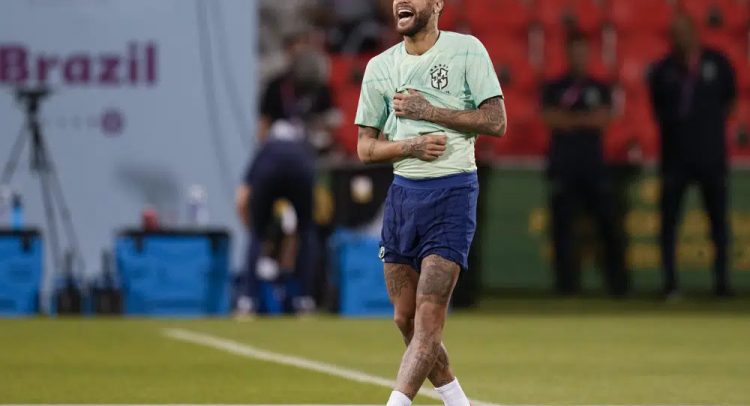 Neymar in Brazil’s lineup against South Korea at World Cup

DOHA, Qatar (AP) — Neymar is in Brazil’s starting lineup for the match against South Korea in the round of 16 at the World Cup on Monday.

The star forward hadn’t played since injuring his right ankle in the team’s group stage opener against Serbia. Coach Tite had said Neymar would play from the start at Stadium 974 depending on how he did in training on Sunday.

Neymar has 75 goals with Brazil, two shy of the all-time record set by soccer great Pelé.

Danilo, who also injured his ankle in Brazil’s opener, joined Neymar in the starting lineup against South Korea. He was set to play in the left back position, though, because Alex Sandro remained sidelined with a hip injury. The other left back, Alex Telles, was dropped from the squad because of a knee injury sustained in Brazil’s loss to Cameroon in its last group game. Central defender Éder Militão was in the right back position.

Neymar’s teammates in attack will be Vinícius Júnior, Richarlison and Raphinha.

Gabriel Jesus also was dropped from the squad because of a knee injury.

Brazil is trying to reach the World Cup quarterfinals for the eighth straight time. South Korea hasn’t made it past the last 16 since its historic run to the semifinals in the tournament it co-hosted in 2002.

Brazil’s Neymar smiles during a training session at the Grand Hamad stadium in Doha, Qatar, Sunday, Dec. 4, 2022. Brazil will face South Korea in a World Cup round of 16 soccer match on Dec. 5. (AP Photo/Andre Penner)