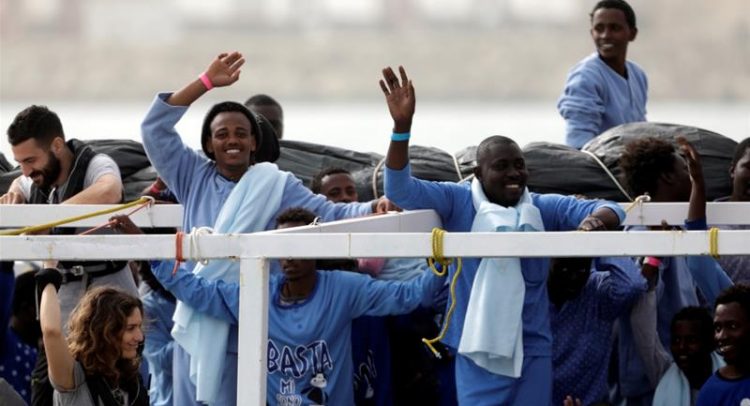 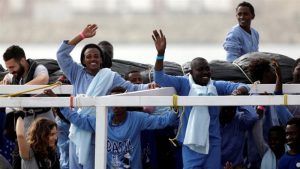 Human rights groups have warned of a campaign of intimidation after Italian authorities seized a Spanish rescue ship and threatened criminal charges against some of its crew members who refused to hand over rescued refugees and migrants to the Libyan coastguard.

The NGO Proactiva Open Arms said its vessel responded to boats in distress in international waters off the coast of Libya on March 15.

The vessel took the 216 rescued refugees and migrants to the Sicilian port of Pozzallo port on March 17, where the ship was seized.

Complications in the operation began when the NGO attended to the second boat in distress.

Crew members said they were approached by a Libyan patrol boat demanding they transferred the migrants to them, claiming the Libyans used “death threats” and intimidation.

The incident was caught on video by the Open Arms staff.

The NGO ship was then left sailing in the Mediterranean for more than 24 hours, as Italian authorities claimed they had not coordinated the rescue and were, therefore, not responsible.

Meanwhile, staff evacuated some of the victims, including a three-month-old and her mother in need of medical attention, to the nearest port, which at that point was Malta.

The ship was eventually allowed to dock in Pozzallo, after the Spanish government intervened in the negotiations.

Italian authorities in Catania then proceeded to confiscate the boat and open an investigation against three crew members – the captain, rescue coordinator and the NGO’s director.

They are accused of “aiding and abetting illegal migration”, and risk up to seven years in prison and hefty fines for the NGO.

“At that point, these people were in European territory, therefore, handing them over would have been a collective pushback,” the captain, Marc Reig, said in a statement, adding handing over the refugees and migrants would have been against international law.

“Despite the immediate vicinity of the island of Malta, [Open Arms] proceeded to sail towards the Italian coast while waiting for instructions from the Spanish authorities,” the Italian coastguard wrote in a statement.

NGOs that operate rescue missions in the Mediterranean fear Italy’s moves were aimed at intimidating rescuers.

“Taking someone back from international waters to a country against their will is a violation of human rights,” Alex Steier, a spokesperson for the German organisation Mission Lifeline, told Al Jazeera. “That’s why it should not be allowed for any ship from the European Union to hand over [rescued people] to the Libyan coastguard,” he explained.

“Due to the seizure of this rescue vessel, the European border regime has reached a new level. Not only are Libyan militias being supported with EU funds, but search and rescue NGOs are being confronted with defamation.

“Now, the criminalisation of solidarity is going so far as to expose organisations who are operating under international law. The only possibility to be rescued at sea is openly being suppressed by radical methods, and even more people will die in the Mediterranean,” Steier said.

In July, Italy asked NGOs operating rescue missions in the Mediterranean to sign up to a code of conduct.

With EU support, Italy provided equipment and training to the Libyan coastguard to patrol the coast and intercept refugees and migrants before they are rescued by NGOs.

“Rules must be respected by all actors involved in search and rescue events, to guarantee that the lives of migrants are not put in further danger and that the sovereignty of the state is respected at all stages,” European Commission spokesperson Natasha Bertaud told Al Jazeera.

“It is for national authorities to investigate any specific cases and we trust the Italian authorities are doing exactly this.”

But according to Human Rights Watch, the charges against the Open Arms NGO are “the latest in a series of measures to discredit NGO rescue groups”.

“It is shocking that Europe has reached the point of criminalising rescue at sea,” said Judith Sunderland, associate director for Europe and Central Asia director at Human Rights Watch. “Europeans should support, not smear, people saving lives in the Mediterranean, and remember that EU and Italian policies are propping up a cycle of detention and violence in Libya, while groups like Proactiva are saving lives.”