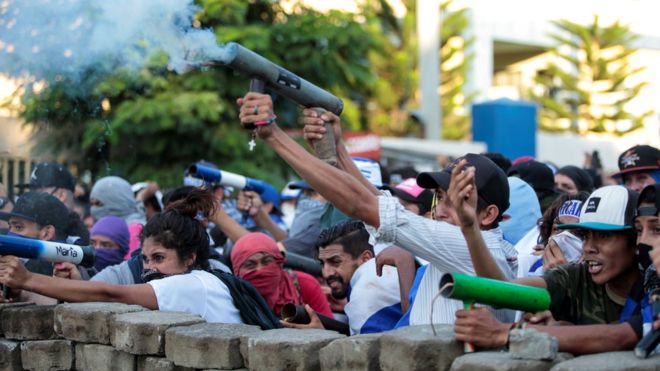 Fifteen people have died and dozens more have been injured in the latest protests against Nicaraguan President Daniel Ortega, officials say.

Activists say pro-government forces opened fire on tens of thousands of protesters who marched through the capital Managua on Wednesday.

The government and police blamed “delinquent groups” for the violence.

More than 90 people have now died in the protests, which began in April and were triggered by social welfare cuts.

The cuts were later scrapped but the protests evolved into a rejection of the Ortega government and thousands of people have since taken to the streets.

“The number of people killed as a product of the actions of delinquent groups who operate wearing masks is 15,” deputy police director Francisco Diaz said on Thursday.

He added that scores of people had been injured, in what was one of the worst days of violence since the protests began.

Some of the demonstrators were reported to have thrown projectiles during Wednesday’s march. The army said it was treating some of the injured, which included police officers.

The country’s Catholic Church condemned Wednesday’s clashes as “organised and systematic aggression” and suspended talks with the government that had been scheduled for Thursday.

It said it could not preside over a dialogue between the protesters and the government following the violence.

Earlier this month, the Inter-American Commission on Human Rights (IACHR) visited Nicaragua and said it had seen grave violations of human rights during the protests. It said state security forces and armed third parties had used excessive force.

The government has responded by setting up a commission to look into the deaths of the demonstrators.