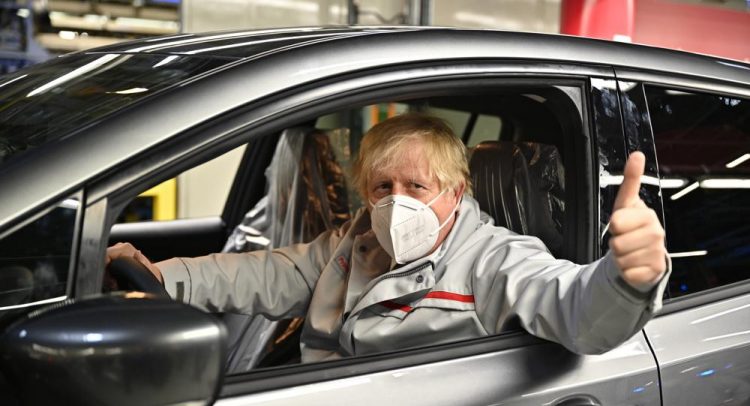 LONDON (AP) — Japanese carmaker Nissan and its partners plan to invest 1 billion ($1.4 billion) pounds to expand production of electric vehicles and batteries in northeast England, a major victory for the U.K. government’s efforts to attract jobs and investment following the country’s departure from the European Union.

Nissan said Thursday it will build a new all-electric crossover sport utility vehicle at the company’s plant in Sunderland, creating more than 6,200 jobs at the factory and its suppliers. As part of the project, Envision AESC will build the U.K.’s first “gigafactory” to supply next generation batteries for the cars.

The announcement marks a turnaround for Nissan, which last year warned its U.K. operations would be “unsustainable” if Britain failed to secure a post-Brexit free-trade agreement with the EU. The government reached a deal with Brussels in December and, freed from EU competition rules, is now able to offer financial incentives to attract investment.

“Nissan’s announcement … is a major vote of confidence in the U.K. and our highly skilled workers in the Northeast,” Prime Minister Boris Johnson said in a statement.

Business Secretary Kwasi Kwarteng suggested the government would help finance the plant, but he declined to provide specifics because talks are continuing with other electric carmakers amid the shift away from fossil fuels.

“It’s no secret that across the world, governments are seeking to attract what is a once-in-a-generation opportunity … to build these gigafactories,” he told the BBC. “We’ve committed some measure of support, but the billion pounds that they’re giving far outweighs and is in far excess of the amount of support that we provided.”

Ashwani Gupta, Nissan’s chief operating officer, said the company made the decision to invest in Sunderland after Britain negotiated a “trade-friendly Brexit.”

The agreement will be seen as a huge boost to the U.K. auto industry, which has been struggling to cope with the new trading relationship with the EU and the economic slowdown caused by COVID-19.

U.K. car production fell 29.3% to 920,928 vehicles last year, the lowest total since 1984, according to figures from the Society of Motor Manufacturers and Traders, an industry trade group.

Automakers are also under pressure to invest large amounts of money in electric car production as countries around the world phase out gasoline- and diesel-powered vehicles due to concerns about global warming.

Mike Hawes, chief executive of the SMMT, said much more needs to be done if the industry is going to meet its goal of producing 1 million electric vehicles by 2030.

The U.K. will need to produce at least 60 gigawatt hours of batteries annually by the end of this decade, according to the SMMT. That’s about 20 times the current production capacity.

The Envision project in Sunderland will have the capacity to produce 9 gigawatt hours of batteries annually. Future investment could push that to 25 gigawatt hours.

“The future competitiveness of our industry depends on securing these investments but also wider support for manufacturing,” Hawes said. “We need a Build Back Better Fund to help manufacturing transformation, as well as a plan for charging infrastructure that will assure consumers to make the switch to these vehicles.”