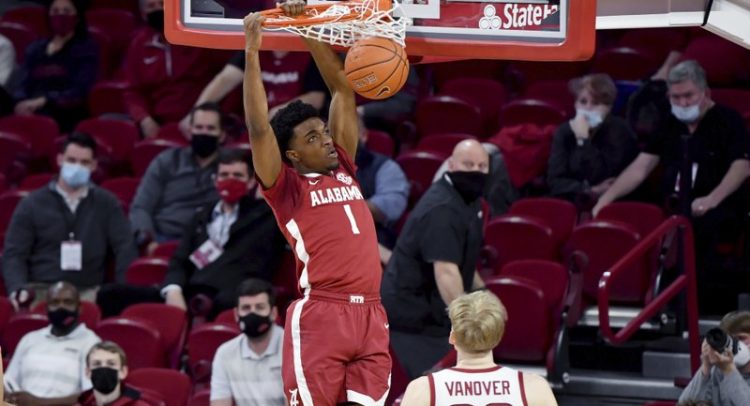 FAYETTEVILLE, Ark. (AP) — It had been nearly a quarter-century since Arkansas had played a ranked team at home, let alone beaten one there.

The Razorbacks, once staples atop the Southeastern Conference standings, hadn’t beaten a ranked team in Fayetteville while they, too, had been ranked since Nolan Richardson was coaching in the late 1990s. That was five coaches and 23 years ago.

Coach Eric Musselman, in his second year with the Razorbacks (18-5, 10-4 SEC), had to change clothes after the game. The celebration was that wet after the Crimson Tide had won the teams’ first meeting by 31 points in January. Arkansas hasn’t lost an SEC game since.

“We’ve run eight in a row and we lost a home game that we didn’t even get to play and we play well at home. I would say this team is playing really good basketball,” Musselman said.

A 17-2 run in the second half was the death blow. Freshman Jaylin Williams scored 10 of his season high 13 points during the stretch and Arkansas (18-5, 10-4 SEC) held Alabama (18-6, 13-2) to the lone two points, a John Petty Jr. jumper, over a stretch of almost nine minutes, turning a six-point deficit to a nine-point lead with less than 10 minutes to play.

Williams grabbed another eight rebounds and finished plus-30 in his 22 minutes. Musselman said he ran more plays for Williams and fellow freshman Moses Moody on Wednesday than he had in any other game all year.

All of Tate’s points came in the first half and he didn’t get to finish the second. Arkansas’ big run clearly flustered Alabama, resulting in Petty picking up a technical foul after arguing a no-call with 6:55 left. Tate and Alabama’s Javon Quinerly picked up coincidental technicals for what appeared to be excessive chatter a couple minutes later and then Tate and Petty were called for their second each with 1:01 remaining, resulting in dual ejections.

A lot of the frustration came from Alabama’s hot and cold nature throughout the game. The Crimson Tide missed their first nine 3-pointers but would follow by making eight of its next 10, including the first basket of the second half, giving them their first lead since the opening five minutes of the game. Arkansas countered with its big stretch to put the game away.

Jordan Bruner led Alabama with 14 points, 12 of which came in the first half. Petty finished with 12.

“We stunk last game (against Alabama),” Musselman said. “You gotta bounce back. I thought we bounced back. You play the sixth-ranked team in the country and you beat them, it’s a heck of a win for the program, I can tell you that.”

IT’S BEEN A WHILE

The game was the first in Fayetteville between Arkansas and a ranked opponent since the 1997-98 season. The Razorbacks had spent parts of five seasons since ranked, but had not faced a fellow Top-25 team at Bud Walton Arena a single time since. Wednesday’s win was also the first Arkansas has had over a Top-10 team since 2016.

Alabama still sits comfortably atop the SEC standings with a two-game lead over the next closest team, Arkansas. The Crimson Tide may be troubled, however, as the defeat drops them just 1-3 against ranked opponents this year.

Arkansas is all but officially in for the NCAA Tournament after a middling January. The Razorbacks haven’t lost in SEC play since falling at Alabama by 31 points on Jan. 16

Alabama travels to Starkville to play Mississippi State in the penultimate game of the regular season.

Citing bad back, Rafael Nadal out of Rotterdam tournament