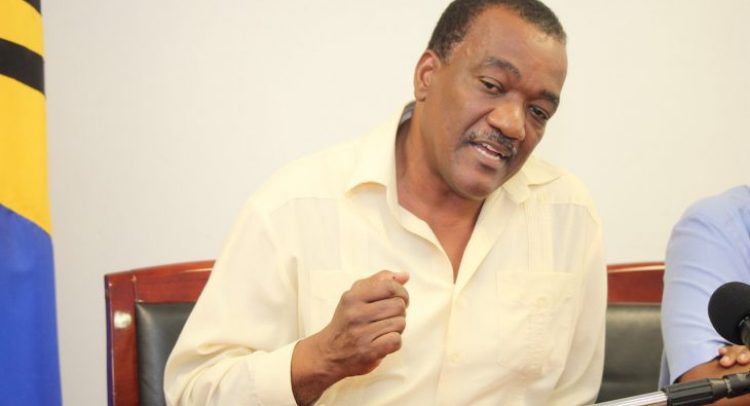 Minister of Health Lieutenant Colonel Jeffrey Bostic is defending Government’s decision not to ban travel from China, which is currently severely impacted by the deadly Coronavirus, even though six CARICOM countries have taken the decision to do just that.

Speaking at a press briefing to update the public on recent CARICOM discussions to combat the global pandemic, Bostic made it clear that Barbados was keeping faith with its prevention protocols, which have been approved by the World Health Organisation (WHO).

He explained that Barbados has covered its bases as it relates to additional medical personnel at the ports of entry, installation of temperature scanners and quarantine facilities at an undisclosed location. He noted that given the rigorous screening of passengers before getting to Barbados as well as the fact that there are no direct flights between Barbados and China, the risk to the country remains low and this could be further reduced when prevention protocols kick in.

“We have six Caribbean territories placing a ban on passengers coming out of China. There were some discussions there and it was agreed that this was more than a health decision as there are other things involved. We in Barbados made the decision based on evidence, based on science, based on history and everything we have seen happening over last several weeks, that we were not going to go this route. We will follow the WHO instructions not to inhibit trade or travel,” Bostic said.

“There has been about a dozen international incidents of this nature over the last 15 years or so and Barbados has never closed its borders. We have always relied on our people, the competence and collaborative skills of the people that we have at our ports of entry to keep the country safe and we are still confident with this,” he added.

In fact, the Minister revealed that this policy was put to the test this weekend, as Barbados gave safe harbor to the AIDA Cruise Ship, which was turned away by St Lucia and other OECS countries on Saturday due to some guest presenting with respiratory illness.

“When the cruise ship AIDA was here, some countries in the Caribbean denied entry but we did not. We based our decision on procedures and protocols and when port health went on the vessel which was carrying about 4,000 people, there were 40 people that were ill onboard including persons with gastroenteritis and other illness not related to the coronavirus.

“The numbers were way below the required number for quarantining a vessel. So, we took the decision to allow the vessel to dock and allow passengers to disembark but those ill passengers had to remain onboard,” said Bostic, while acknowledging that a major outbreak of the illness in Barbados could be beyond the capabilities of the Queen Elizabeth Hospital.

“When we did our analysis of the situation, we determined that the airport was the most vulnerable area because the international regulations governing cruise ships coming into ports of entry are very strong and we have been doing this for a very long time. These cruise ships have their own hospitals on board, their own medical staff, their own quarantine station and we get information on the cruise ship up to four hours before they arrive. Port health officials then go onboard and scrutinize the medical data so that we can make certain determinations,” the Minister explained.

Nike's controversial shoe will be commercially available this year