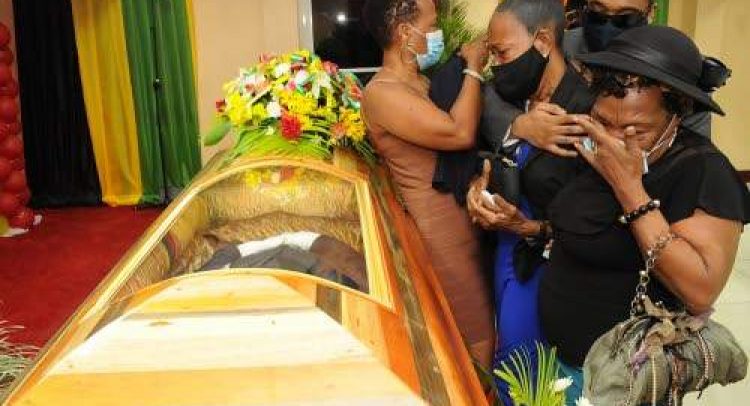 The body of legendary reggae pioneer Frederick “Toots” Hibbert was not interred in the Dovecot Memorial Park in Spanish Town, St Catherine, yesterday as planned, as family members were unable find his burial order.

His body was returned to Perry’s Funeral Home in Spanish Town, where the thanksgiving service was held earlier in the day.

By law, no interment can take place without a burial order.

“It’s frightening. We deh deh (Dovecot) fi hours… The family members a search dem purse. Mrs Hibbert drive back to her yard (in Kingston) fi try find it. Everybody eventually had to leave the funeral and his body went back to the funeral home,” a reliable source told the Jamaica Observer’s Splash. “Today done spoil already. I hope they can get a copy of the burial order tomorrow (Friday). It’s a disgrace!”

Meanwhile, at Hibbert’s funeral the call made for more accolades to be heaped on late Jamaican musical icon.

In eulogising the artiste recognised as having named the reggae genre of music, attorney-at-law Ian Wilkinson referred to Hibbert as Jamaica’s first musical superstar, given that his ‘ascension’ came ahead of many of his contemporaries including reggae king Bob Marley.

Hibbert was bestowed with the Order of Jamaica in 2012, but Wilkinson called for him to be including among the select numbers who have been elevated to the higher category of Order of Merit, which is conferred on persons who have achieved eminent international distinction in the fields of science, the arts, literature, or any other endeavour.

“Toots was the entire package. Super-duper star. He was the entire package with his singing and dancing. He had the engagement singing and playing his guitar… all of that. But Toots was a philosopher people. He spoke to the people of philosophy through the music. Ladies and gentlemen Frederick ‘Toots’ Hibbert deserves his place in immortality. He deserves to be awarded the Order of Merit. He deserves to be inducted into the Rock and Roll Hall of Fame,” Wilkinson told a small gathering of mourners lead by Hibbert’s widow, Doreen.

“This was a father, a grandfather, a mentor, a pioneer, a man of no ordinary talent who came and saw the world as his stage, as Shakespeare would tell you. He took it and left the people wanting for more and left the people smiling. Whether it was Singapore, the USA, Germany, wherever he went people could not stop talking about Frederick ‘Toots’ Hibbert. He was a man for all season,” Wilkinson concluded.

The thanksgiving service, which was held at Perry’s Funeral Home in Spanish Town, St Catherine, was followed by a private burial at the Dovecot Memorial Park. The Hibbert family decided against an interment at his birthplace in Clarendon. There was also murmurings that he should have been laid to rest at the National Hero’s Park in Kingston, in the section reserved for cultural icons. However, Entertainment and Culture Minister Olivia “Babsy” Grange told the Jamaica Observer that a decision had been taken to suspend the burial of cultural icons in this section of the park , leaving the remaining space for former prime ministers. Folklorist Louise Bennett Coverley (Miss Lou), actor Ranny Williams, and the crown prince of reggae Dennis Brown are among the culture figures buried in this area.

Hibbert died at the University Hospital of the West Indies on September 11 from COVID-19 complications.

He is best known for songs including Monkey Man, Bam Bam, Pumps and Pride, Country Road, and 54-46.

Trump, Biden go at it — from a distance — in town halls