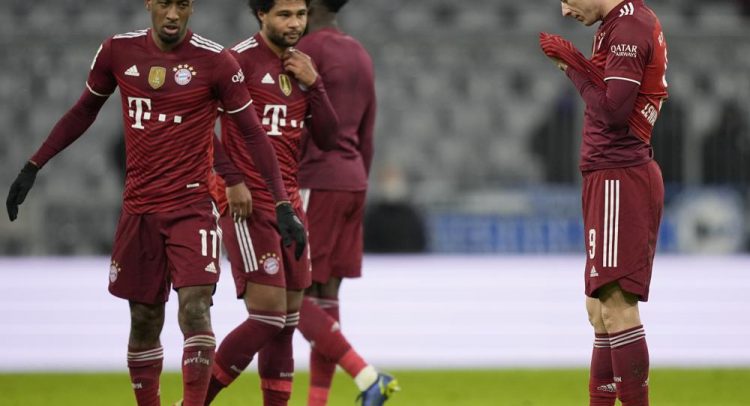 No fans for Bayern’s Champions League game against Barcelona

MUNICH (AP) — No spectators will be allowed in the stadium next week when Bayern Munich hosts Barcelona in the Champions League because of stricter coronavirus measures, the governor of the German state of Bavaria said Friday.

Markus Söder said Bavaria will bar fans from sports events starting Saturday. German federal and state leaders agreed on a maximum attendance limit of 15,000 on Thursday but states are allowed to set stricter rules if they wish.

Bayern hosts Barcelona on Wednesday. Bayern has already qualified for the knockout stage but Barcelona will be eliminated if it fails to win and Benfica beats Dynamo Kyiv.

“It hits us very hard that we have to play in front of empty stands in the Allianz Arena again,” Bayern executive vice chairman Jan-Christian Dreesen said. “Without our fans in the stadium, soccer is only half as beautiful, to say nothing of the financial consequences.”

The first top-division men’s soccer game to be affected by the new rules in Bavaria is Augsburg’s game against Bochum in the Bundesliga on Saturday.

Bavaria has had some of Germany’s highest coronavirus infection rates in recent weeks. The eastern state of Saxony already mandated empty stadiums for games last month, meaning Leipzig will not have fans when it hosts Manchester City on Tuesday.

The southwestern state of Baden-Württemberg has set a limit of 750 spectators, affecting Freiburg, Stuttgart and Hoffenheim. But there will be 15,000 allowed when Borussia Dortmund hosts Bayern Munich for the “Klassiker” on Saturday.

Some clubs criticized how the new restrictions were implemented. Stuttgart said it “deeply regrets” the state limit of 750 spectators, arguing that vaccine requirements and other rules made larger crowds possible. Bayer Leverkusen CEO Fernando Carro said it was “more than annoying and actually hardly feasible” to cut the capacity to 15,000 at such short notice.

Over 600 booster shots administered in St. Kitts and Nevis to date

Baldwin: ‘Someone is responsible’ for shooting, but ‘not me’