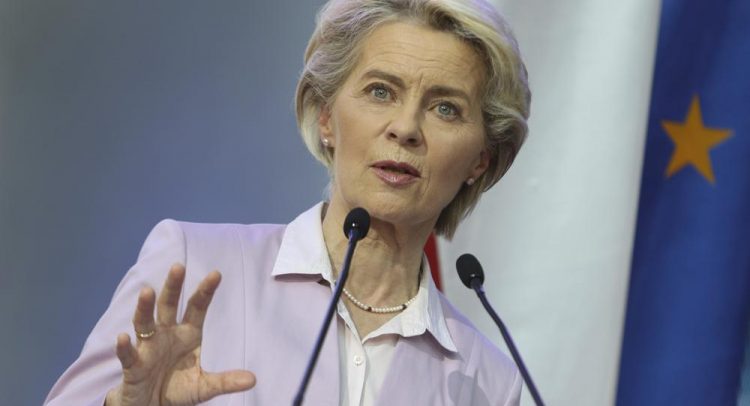 No justice reform in Poland, no money, EU chief vows

BRUSSELS (AP) — The European Union’s chief executive vowed Tuesday that Poland would get no money from the bloc’s vast pandemic relief fund until the right-wing government rolls back measures deemed to limit the independence of the country’s judiciary.

Poland is line to receive nearly 36 billion euros ($38.5 billion) to help its economy recover from the impact of measures introduced to limit the spread of the coronavirus. But the EU has frozen its access to the funds amid concern about political interference with the judiciary.

The European Commission, which proposes EU laws and supervises the way they are enacted, insists that a disciplinary chamber for Polish judges be abolished, that its rulebook be rewritten and that judges sanctioned by the chamber have their cases reviewed.

“Let me be very clear. These three commitments, translated into milestones, must be fulfilled before any payment can be made,” European Commission President Ursula von der Leyen told EU lawmakers in Strasbourg, France.

The European Parliament has also launched action against Poland over democratic backsliding. The lawmakers have criticized von der Leyen and her commission for being too slow to act. Some are calling for a no-confidence vote on her should the commission release any funds too early.

“I know that some of you are skeptical, but let me assure that no money will be disbursed until these reforms are undertaken,” von der Leyen said. “A first payment will only be possible when a new law is in force that ticks all the boxes under this contract,” she said of a plan for Poland to access the funds.

Von der Leyen added that “Poland must demonstrate by the end of 2023 that all unlawfully dismissed judges have been reinstated. If this is not the case there cannot be any further disbursement.”

Poland’s lawmakers are still working on changing Supreme Court regulations to abolish the disciplinary chamber. Only one of the dozens of suspended judges has been reinstated, but to a different section in his court, and has been ordered to go on leave.

Many EU lawmakers argued that Poland should have met the conditions before its action plan for access to the recovery fund was submitted. Even some senior members of von der Leyen’s own commission had reservations about the Polish plan.

Dutch liberal parliamentarian, Sophia In’t Veld, said the commission’s conditions are merely “a smokescreen.” Facing von der Leyen, she said: “If you make any payment to Poland without all the criteria having been fully met, you lose my confidence. It’s democracy.”

Poland’s pandemic recovery plan must still be endorsed by the other 26 EU member states before the end of the month. It would pave the way for government to eventually gain access to 23.9 billion euros ($25.4 billion) in grants and 11.5 billion euros ($11.7 billion) in loans.

EU officials have said that Poland is unlikely to win access to any of the money for several months.

European Commission President Ursula von der Leyen speaks during a joint news conference with Poland’s Prime Minister Mateusz Morawiecki and Polish President Andrzej Duda at the headquarters of Poland’s Power Grid in Konstancin-Jeziorna, Poland, Thursday, June 2, 2022. The independence of Poland’s courts is at the heart of a dispute with the European Union, which has withheld billions of euros in pandemic recovery funds. (AP Photo/Michal Dyjuk)