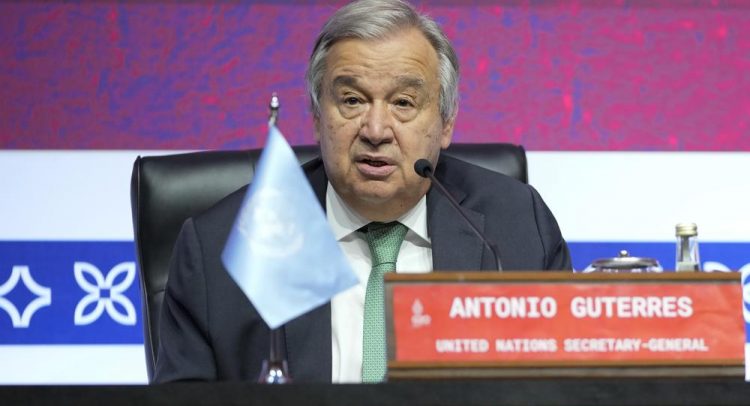 North Korea calls UN’s Guterres ‘puppet of US’ after launch

U.N. Secretary-General Antonio Guterres earlier issued a statement strongly condemning North Korea’s ICBM launch on Friday and reiterating his call on the North to “to immediately desist from taking any further provocative actions.” Guterres’s statement came after the United States and other countries issued similar criticism of the North’s ICBM test that showed an potential to strike anywhere in the continental U.S.

“I often take the U.N. secretary-general for a member of the U.S. White House or its State Department,” North Korean Foreign Minister Choe Son Hui said in a statement carried by state media. “I express my strong regret over the fact that the U.N. secretary-general has taken a very deplorable attitude, oblivious of the purpose and principles of the U.N. Charter and its proper mission which is to maintain impartiality, objectivity and equity in all matters.”

Choe accused Guterres of overlooking the U.S. and its allies taking the North’s ICBM test to the U.N. Security Council, saying that “This clearly proves that he is a puppet of the U.S.”

The U.N. Security Council scheduled an emergency meeting for Monday morning on North Korea’s ICBM launch at Japan’s request. But it’s unclear if it can impose new economic sanctions on North Korea because China and Russia, two of the council’s veto-wielding members, have opposed the previous U.S. and its allies’ moves to toughen sanctions on the North over its banned tests of ballistic missiles earlier this year.

On Sunday, top diplomats from the world’s major industrialized democracies issued a joint statement calling for strong steps by the U.N. Security Council in reaction to the North Korean missile launch. “(North Korea’s) actions demand a united and robust response by the international community, including the need for further significant measures to be taken by the U.N. Security Council,” said the statement by foreign ministers from the Group of Seven nations — Canada, France, Germany, Italy, Japan, the United Kingdom and the United States.

Friday’s ICBM launch was the latest in North Korea’s ongoing torrid run of missile tests that experts say are meant to boost its nuclear capability and increase its leverage in future diplomacy.

North Korea said leader Kim Jong Un observed Friday’s launch of its Hwasong-17 missile and called it another “reliable and maximum-capacity” weapon to contain U.S. military threats. Some experts say the Hwasong-17 is still under development but it’s the North’s longest-range missile and is designed to carry several nuclear warheads to overcome U.S. missile defense systems.

North Korea has argued its testing activities are a warning to the United States and South Korea over their series of military drills that the North believes were an invasion rehearsal. Washington and Seoul have maintained their exercises are defensive in nature.

In her statement Monday, Choe again defended her country’s missile tests, calling them “legitimate and just exercise of the right to self-defense” against “provocative nuclear war rehearsals” by the United States and its allies. She said it’s “most amazing and deplorable to me” as Guterres still blamed North Korea for a recent flare-up in tensions on the Korean Peninsula, not the United States.

A day before her country’s ICBM test, Choe threatened to threatened to launch “fiercer” military responses to steps by the U.S. to bolster its security commitment to South Korea and Japan.