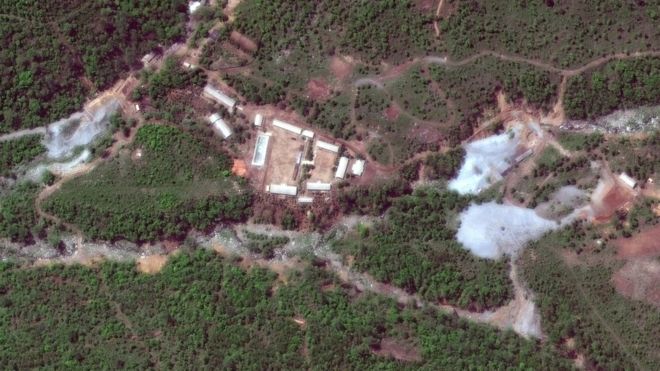 North Korea appears to have blown up tunnels at its only nuclear test site, in a move to reduce regional tensions.

Foreign reporters at the Punggye-ri site in the north-east said they witnessed a huge blast. Pyongyang later said the site had been dismantled.

The move by the North is seen as part of a diplomatic rapprochement with South Korea and the US.

But scientists believe it partially collapsed after the last test in September 2017, rendering it unusable.

Independent inspectors were not allowed to witness the process of the dismantling of the Punggye-ri site in the mountainous region of the country, and some worry it could be easily reversible, the BBC’s Laura Bicker reports.

It comes ahead of a planned summit between US President Donald Trump and North Korean leader Kim Jong-un in Singapore on 12 June.

However, in recent days both countries have said the meeting could be delayed or even called off, amid sharp verbal exchanges between US and North Korean officials.

What happened on Thursday?

Three tunnels were collapsed in a series of explosions in front of about 20 handpicked international journalists.

Two blasts were reportedly carried out in the morning, and four in the afternoon.

Tom Cheshire of Sky News was among the journalists present. He said the doors to the tunnels were “theatrically rigged” with “wires everywhere”.

“We hiked up into the mountains and watched the detonation from about 500 metres [550 yards] away,” he said.

“They counted it down: three, two, one. There was a huge explosion, you could feel it. Dust came at you, the heat came at you. It was extremely loud.”

North Korea’s Nuclear Weapons Institute later said in a statement that the dismantling of the site “was done in such a way as to make all the tunnels of the test ground collapse by explosion and completely close the tunnel entrances”, NK News website says.

“It has been confirmed that there were neither leakage of radioactive materials nor any adverse impact on the surrounding ecological environment.”

“[We] expect it to serve as a chance for complete denuclearisation going forward,” Foreign Affairs Ministry spokesman Noh Kyu-duk was quoted as saying by Yonhap news agency.