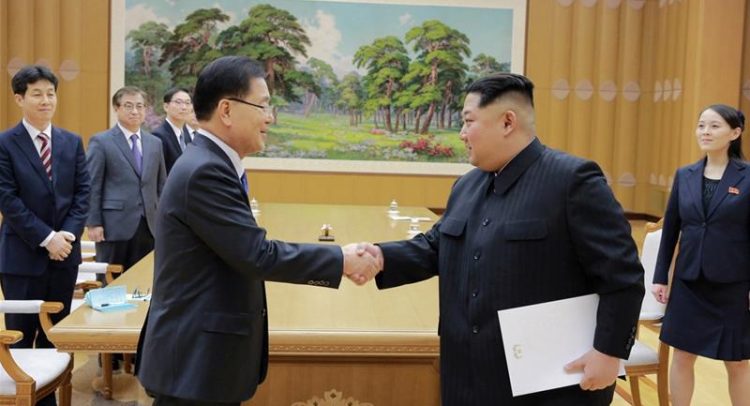 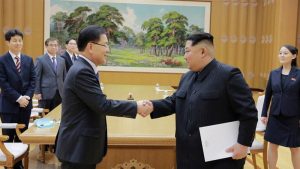 North Korean leader Kim Jong-un has agreed to meet with South Korea’s president next month and impose a moratorium on nuclear and missile tests if his country holds talks with the United States, a senior South Korean official said on Tuesday after returning from the North.

The agreements, which follow a flurry of cooperative steps taken by the Koreas during last month’s Pyeongchang Winter Olympics, brightened prospects for a dialogue between North Korea and the US over the North’s nuclear programme.

In a press briefing on Tuesday, Chung Eui-yong also announced that the North Korea leader and his South Korean counterpart Moon Jae-in will hold a landmark summit in April.

The summit of the two leaders will be held at the joint security area of Panmunjom, according to the official South Korean news agency, Yonhap.

“The North side clearly affirmed its commitment to the denuclearisation of the Korean Peninsula and said it would have no reason to possess nuclear weapons should the safety of its regime be guaranteed and military threats against North Korea removed,” he said.

Chung also said that North Korea has expressed willingness to hold “candid” talks with the US on the issues of denuclearisation and normalisation of bilateral ties.

He also said that as long as the there is progress in the talks between the US and North Korea, Pyongyang will pause its nuclear tests and ballistic missile launches.

The latest diplomatic development comes just weeks after South Korea’s hosting of the Winter Games, in which athletes of the two Koreas marched together in a show of unity.

It added that the North Korean leader has expressed his “firm will to vigorously advance” inter-Korean dialogue and the contingued negotiations on reunification.