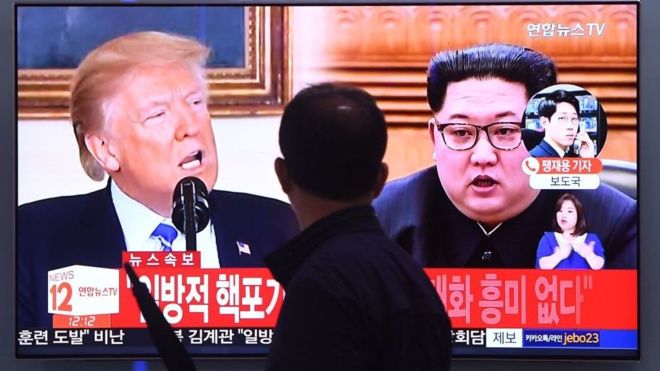 North Korea ready to talk ‘at any time’ with Donald Trump North Korea has said it is still willing to talk “at any time in any form” after US President Donald Trump abruptly cancelled his summit next month with Kim Jong-un.

President Trump blamed the North’s “open hostility” for the cancellation.

But he welcomed the latest statement from Pyongyang, describing it as “warm and productive”.
End of Twitter post by @realDonaldTrump
The summit would have been the first time a sitting US president had met a North Korean leader.

The details of the meeting in Singapore on 12 June were unclear. But talks would have focused on ways of denuclearising the Korean peninsula and reducing tensions.

Just hours before Mr Trump’s announcement cancelling the summit on Thursday, North Korea said it carried out its promise to dismantle tunnels at its only nuclear test site.

Mr Trump’s decision to scrap the summit was in the form of a letter personally addressed to Mr Kim.

A senior administration official in the US later gave further details, saying North Korea had shown “a profound lack of good faith”.

There were a series of “broken promises” from Pyongyang, the official told reporters, including when the White House sent the deputy chief of staff to Singapore to meet North Korean diplomats ahead of the summit.

“The North Koreans didn’t show up. They simply stood us up.”

The official also said President Trump had “dictated every word” of his letter to Kim Jong-un.