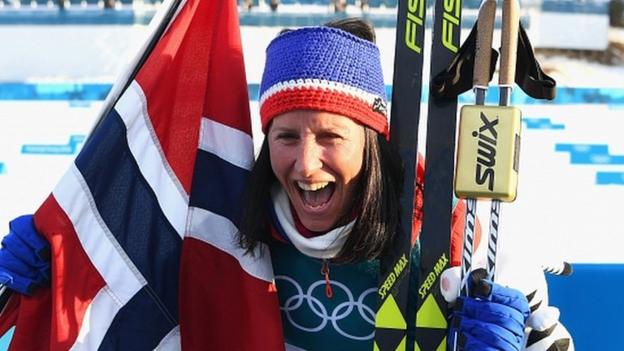 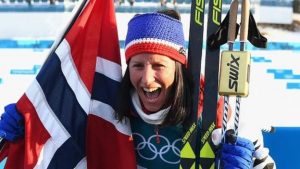 Norway topped so many podiums they ran out of commemorative shoes, Germany enjoyed a gloriously golden fortnight, and the United States’ women “saved” their country’s 2018 Winter Olympics.

There were 102 gold medals up for grabs across 15 sports in Pyeongchang, with the likes of big air snowboarding, mixed-doubles curling, mass start speed skating and mixed-team alpine skiing added to the programme.

Ester Ledecka won two golds in two different sports, Marit Bjorgen became the most decorated Winter Olympian of all time, and five was the magic number for Great Britain’s competitors.

Here BBC Sport looks at the stats behind the medals in Pyeongchang.

This was a remarkable Games for Norway – minnows in terms of population but powerhouses in the winter sports world – as they surpassed USA’s record of most medals won at a single Winter Olympics.

The Americans racked up 37 at Vancouver in 2010, but the Norwegians finished on 39 in Pyeongchang, with Bjorgen winning her fifth medal of the Games in the final event, the women’s cross-country skiing mass start.

Their final tally was 13 more than their previous best medal haul of 26 – set at both Lillehammer in 1994, and Sochi last time out. They did this with a team of 109 athletes – 133 fewer than USA sent to Pyeongchang, and 45 fewer than Germany.

Both Norway and Germany finished with 14 golds – matching the record set by Canada at Vancouver in 2010.

Norway have now finished top of the medal table at eight Winter Games, but this is the first time since 2002.

They and Austria are the only two countries to have won more medals at the Winter Olympics than in summer Games.

“These guys have an extreme need to come first. They are obsessed about winning,” said the country’s chef de mission Tore Ovrebo.

Ovrebo recently told Time that Norway’s athletes – some of whom work as plumbers, carpenters and teachers – do not receive prize money or bonuses from their federations for winning medals. Instead they are given commemorative gold-coloured shoes. And cake.

The team’s gold rush in Pyeongchang did create a slight problem for their officials, who ran out out of the commemorative shoes they give to athletes for medal ceremonies.

Their skiers spend 250 days a year together, play cards and enjoy ‘taco nights’, and super G bronze medallist Kjetil Jansrud says there is a “no jerks” rule on the team.

The secret to Norway’s success? Snow…

They will be celebrating modestly back home in Oslo, in sub-zero temperatures, in the snow…. and that is apparently the, perhaps obvious, secret to Norway’s success.

Asked what was behind their achievements, Ovrebo replied: “Snow.”

He added: “We are proud but we’re not bragging. That is very important because this is how we do it in Norway.

“The medal count is one thing, but that’s secondary. The most important thing is we have had fun all the time and we are friends and we are still friends.”

Bjorgen the best of all time

Norway have long relied on the skis of Bjorgen to deliver medals. She became the most decorated Winter Olympian of all time with five medals at these Games taking her overall tally to 15.

The 37-year-old cross-country skier surpassed compatriots Ole Einar Bjorndalen and Bjorn Daehlie as she took bronze in the 10km individual and team sprint, silver in the pursuit, gold in the 4x5km team relay and a final gold in the mass start.

She departs the Olympics as the second most successful woman at either the Summer or Winter Games, trailing only Soviet gymnast Larisa Latynina (18 medals).

Johannes Klaebo was also a notable contributor to the Norwegian cause on his Olympic debut. The 21-year-old won three cross-country skiing gold medals while, at the other end of the age spectrum, 35-year-old Aksel Lund Svindal took the downhill title.

Weinstein Company to file for bankruptcy