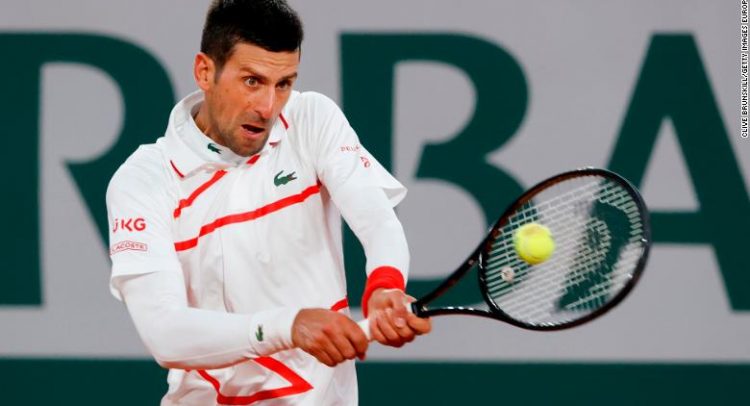 Novak Djokovic started his French Open campaign with a comfortable win over Sweden’s Mikael Ymer as he bids to turn a page on the fiasco at this year’s US Open.

The 33-year-old barely broke sweat as he strolled to a straight sets victory, 6-0 6-2 6-3 on Court Philippe Chatrier Tuesday.

Djokovic was playing in a first grand slam match since being defaulted from Flushing Meadows in September after hitting a line judge with a ball during his fourth-round game.

He later apologized for the incident — which led to his only defeat in 2020 — but was met by a wave of criticism.

“I had to accept it and move on. Of course, it was a shock for me and a lot of people,” Djokovic told reporters ahead of his first-round match at Roland Garros.

His response since that difficult period has been nothing short of impressive. He won his fifth Italian Open title in preparation for this clay-court slam and was rarely troubled against world No. 80 Ymer in the first-round encounter.

A brilliant Djokovic won the first set in 20 minutes without dropping a game but his 22-year-old opponent began to settle down as the match progressed.Yves produced a stunning shot between his legs in the second set, a rare highlight in an otherwise bruising encounter against the Serbian’s crushing forehand.

It would have been worrying viewing for Djokovic’s rivals, including US Open champion Dominic Thiem who watched the opening stages of the tie from the stands.

Djokovic, who had admitted the episode in New York had shaken him, is bidding to win his 18th major in Paris.

There will be tougher tests to come for the world No. 1, who will likely have to defeat Rafael Nadal to get his hands on the trophy.

Nadal has an unparalleled record at Roland Garros having won 12 titles in the past 15 years and would draw level with Roger Federer on 20 grand slam singles titles with victory in Paris.

This year’s tournament, which was moved to September due to the pandemic, has continued to throw up complications for players.

Some have been complaining about the cold weather and the tournament’s switch from Babolat to Wilson balls which is seen as a disadvantage for players who favor topspin, such as Nadal.

The lower bounce will theoretically play into Djokovic’s hands, with the Serb an expert at baseline accuracy.

Djokovic faces Ricardas Berankis of Lithuania in his second round tie.

Main photo: Djokovic was playing in his first grand slam match since the US Open.

Microsoft 365 services are coming back after major outage